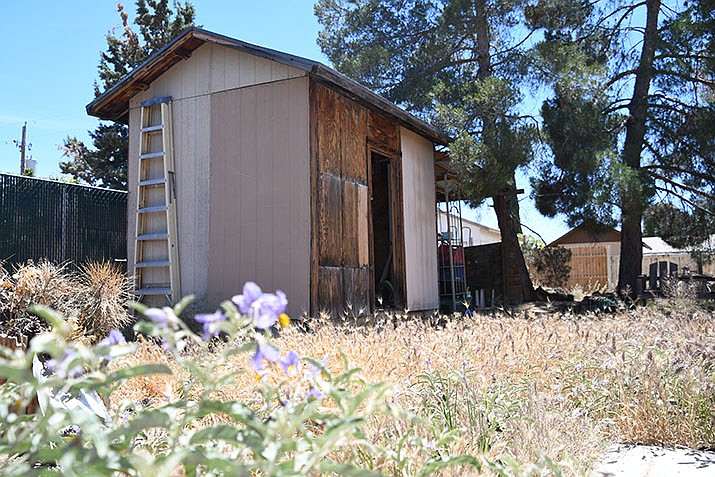 Kingman’s zoning ordinance, at least in regards to setback requirements for accessory structures, has remained more or less the same since 1971. If a structure was installed before then, it could be grandfathered in. However, if improperly installed after that point in time, the owner could one day have to relocate the shed. (Photo by Vanessa Espinoza/Daily Miner)

A family moves to a Kingman home with more than enough space to accommodate them, or a retired couple settles down to spend their sunset years in the Heart of Route 66. As the family grows and the activities enjoyed by the retirees increase in number, there could come a time when more storage space is needed. However, if residents don’t adhere to the City’s zoning ordinance, they could be in for a headache down the road.

According to City staff in the Planning and Zoning Department, Kingman is facing a recurring problem related to the placement of accessory structures, such as sheds, on lots throughout town. At the heart of the confusion is those installing sheds that are 200 square feet or less and are not required to obtain a building permit. As such, some believe they can place their sheds wherever they would like on their property. That, explained City Planners Sylvia Shaffer and Rich Ruggles, is not the case.

“With sheds, and typically any detached accessory structure which includes a shed that’s 200 square feet or below, they don’t require a building permit,” Shaffer said. “And so what is going on is that people will buy their sheds under 200 square feet and place it on their property and they don’t always come into see us, nor do the people selling them always know what the setback requirement is.”

Kingman’s zoning ordinance, at least in regards to setback requirements for accessory structures, has remained more or less the same since 1971. If a structure was installed before then, it could be grandfathered in. However, if improperly installed after that point in time, the owner could one day have to relocate the shed. Does that mean someone who installed a shed in 1990 and that didn’t meet setback requirements could hear from the City in 2019 about the violation? The answer is yes.

City staff in the coming months will provide the Planning and Zoning Commission with a few options to address the issue surrounding setback requirements and smaller sheds. (Daily Miner file photo)

“You can’t grandfather in something that’s not legal,” Ruggles said.

“The biggest complaint we get from people are that sheds are placed up against the rear as a wall,” Shaffer explained. “So then we go out on the complaint, because we’re complaint driven, and have to address the shed that’s been put up.”

That does mean people sometimes go tit for tat when it comes to complaints. Planning and Zoning sends a letter to the resident in a particular lot informing them of a violation. Often times, the first question staff receives is ‘Who complained?’ Staff cannot disclose that information.

“Most of the time it’s not the person they think it was,” Shaffer said.

Staff goes to the site to look at the accessory structure. If it doesn’t meet setback requirements, the owner will receive a “courtesy letter” from the City informing them of the violation. If no action is taken in around 30 days, a more formal, certified letter will be sent along with a time to comply. That is, again, typically 30 days. If corrective action still is not taken, the matter goes to the courts. While the charge would be a misdemeanor, it could still carry hefty fines costing hundreds to thousands of dollars, probation or even brief jail time.

The Planning and Zoning Department is working on a solution to the issue. Ruggles and Shaffer identified three possibilities which they will take to the Planning and Zoning Commission in the coming months. The City could implement a “courtesy permit” for sheds, it could remove setback requirements for sheds 200 square feet or less or the department could be allocated more staff to address the complaints.

“A lot of times when we have things repeatedly being a problem, then we try to take a look at our ordinance to see if there’s something we can do,” Shaffer said. “We have no idea how this will go, if it’ll be supported or not.”

If in doubt or generally unsure about zoning or setback requirements when thinking of installing an accessory structure, contact the Planning and Zoning Department.

“Do your due diligence,” Ruggles said, speaking to how the issue can be addressed before it becomes a problem.