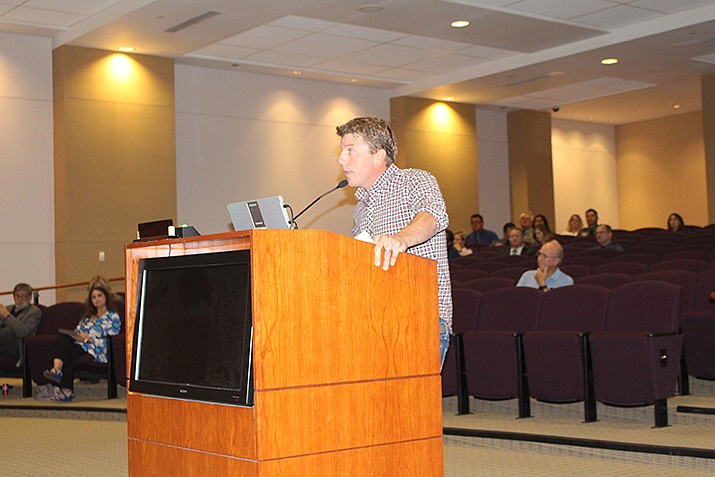 Trent Pike speaks to the Mohave County Board of Supervisors on Monday, May 20, 2019 regarding his attempts to opening a steakhouse in Mohave Valley. Pike accused County Manager Mike Hendrix of “controlling the board.” (Photo by Agata Popeda/Daily Miner)

KINGMAN – The Mohave County Board of Supervisors approved the Mohave County Department of Public Health to start having Northern Arizona University students over for clinical practicum, externship and internship programs, beginning this year. The board approved the relationship until April 2014.

Many residents expressed concern about the future of the Malibu Road Improvement District in Golden Valley. The board agreed unanimously to approve Mohave County Public Works Engineer Manager Leslie R. Henley, P.E. as the Malibu Improvement District Engineer for the design of road improvements to Malibu Road, Huntington Drive, and Toni Jo Drive. The goal is to bring the roadway segments into conformance with Mohave County's standards so that in the future they may be accepted into the county.

Erin Collins from ECA Inc., which provides the county with consulting services on county employee benefits portfolios and wellness programs, discussed the 2019 Open Enrollment Benefits. He spoke about the challenges created by the opioid crisis and identified breast cancer, cardiac and diabetes problems as the most pressing health issues in the county. He also mentioned that Arizona has a serious skin cancer problem, prompting a comment from Supervisor Ron Gould that Northern Europeans were not meant to live in Arizona.

There is an ongoing conflict in the local GOP. Precinct committeemen Steve Robinson and fellow Republican Tanya Jordan continue to disagree on who should and who should not be a precinct committeeman, with both of them pointing out various irregularities in the application process. Robinson spoke to the board and informed them on the issue.

Arthur Garnica, with whom Arizona Attorney General sided with on what is and what is not within the board’s jurisdiction, spoke to the board to complain about a fire chief in the Northern Arizona Consolidated Fire District. He said that, ironically, according to the county recommendation, he should file his complaint with the fire chief, whom he accused of conflict of interest. Garnica requested an appointment with the county attorney.

Trent Pike, a businessman who for the third year is attempting to open a steakhouse in Mohave Valley, accused County Manager Mike Hendrix of “controlling the board,” with the exception of Gould. While Pike claims his plans were lost, Hendrix said he has done everything he could for Pike, and as far as he knows, the county is waiting for him to respond to their letter.