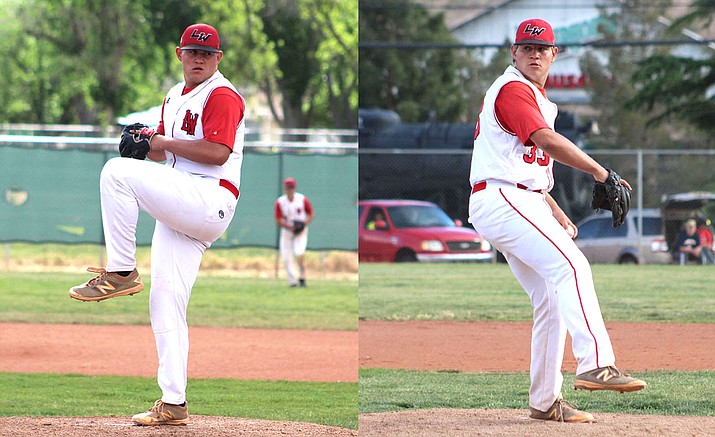 Mike Bathauer, left, and twin brother Matt were named to the 4A All-State first team. They were the only first-team selections from the 4A Grand Canyon Region. (Daily Miner file photos)

KINGMAN – As the saying goes – it’s not how you start, but how you finish.

Matt and Mike Bathauer couldn’t have asked for a better ending to their Lee Williams High School careers as the twin brothers were the lone 4A Grand Canyon Region baseball players named to the 4A All-State first team.

Mike was selected as a position player after his .516 batting average ranked second in the conference behind Walden Grove’s Juan Carlos Navarro (.536). Mike also had a .565 on base percentage along with 31 runs scored and 24 RBIs.

Matt, meanwhile, garnered first-team honors as a pitcher after striking out 92 batters in 57 1/3 innings of work, which was second-best in 4A behind Mesquite’s TJ Clarkson’s 113 punch outs.

Matt was first in the conference with his 10-1 mark on the mound and also finished with a 2.93 ERA in 13 appearances.

The Bathauers helped lead the Vols to a 15-1 mark during the 2019 season and back-to-back 4A Grand Canyon Region titles. Lee Williams will surely miss the pair as they graduate Wednesday and continue their baseball careers at Adams State.

They won’t be the only Vols in Colorado as former teammate Paul Giglio is also on the squad. The trio is quite familiar with each other and it’s likely to create a future for other Lee Williams baseball athletes.

“It’s opening up a new pipeline,” Mike told the Daily Miner when he signed at Adams State. “We can be a feeder for them with Lee Williams being a good baseball school. I’m pretty sure we’re going to have a lot of good players coming through the ranks and a lot more opportunities for them.”