Kingman area students graduated high school, ready to take on the future
The tassel was worth the hassle 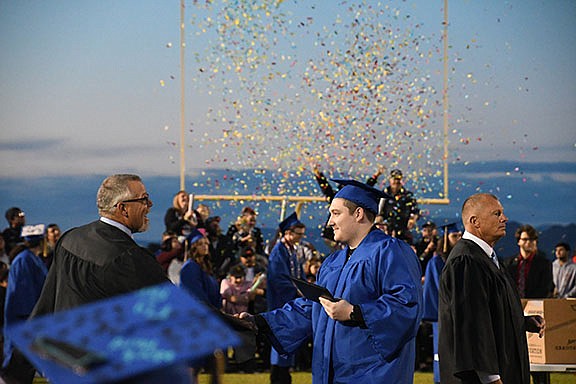 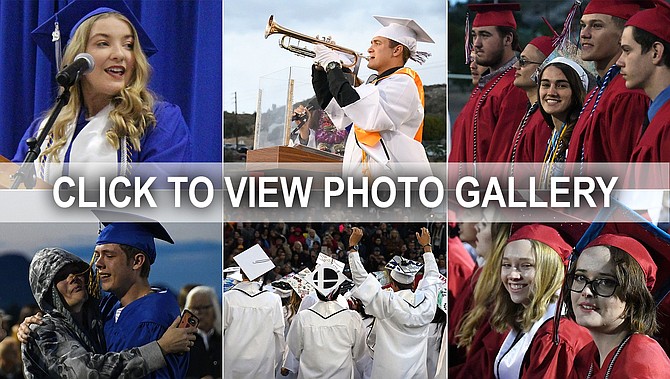 Not every graduation is the same. But the majority of them are student driven. KHS students embraced their cultures through the attire they wore underneath their gowns and how they decorated their caps.

Native American students wore their tribe’s attire along with feathers on their caps. Students with Mexican backgrounds decorated their caps with the Mexican flag or with their favorite saying in Spanish. The benediction was given in both English and Spanish.

“We definitely have a culturally rich group of kids and it is wonderful that they shared their heritage,” Emily Baker, KHS counselor said. “From their cap decorations to how they dressed.”

At KHS graduation, Vice Principal John Venenga presented an honorary diploma to the family of Tyrone Fielding who would have graduated Monday, but passed away.

Before students turned their tassel to the next chapter in their lives, Paige Lucero and Hallie Powell recognized school administration.

They wished Gretchen Dorner, LWHS principal, good luck on her future endeavors as she takes on the position of Kingman Unified School District Superintendent. Students reached out to people to see how they would describe Dorner and they responses they received were great.

People described her as, “a heart with legs,” “inspirational,” and “dedicated.”

“But we felt the best way to describe her is truly amazing,” Lucero said. “Mrs. Dorner, you have left your mark on every person who has walked through the doors of Lee Williams High School.”

They thanked Superintendent Roger Jacks, as he is set to retire at the end of June, for providing 13 years of service to the district and for the guidance he has given to the students in the district. Students also welcomed Scott Taylor, who will take the position of LWHS principal.

Although the weather downtown was a bit rainy and cold, that didn’t stop the LWHS graduating class from enjoying their special day.

KAOL students were in the Betty Rowe Gymnasium for one last time with their peers, family and school staff as they walked across the stage to receive their diploma. Isabella Anderson, Vail Becker and Megan Victory were three young women who graduated at the top of their class.

One thing all ceremonies had in common was that families and friends were proud of their graduates.