4 killed in wrong-way accident on Interstate 40 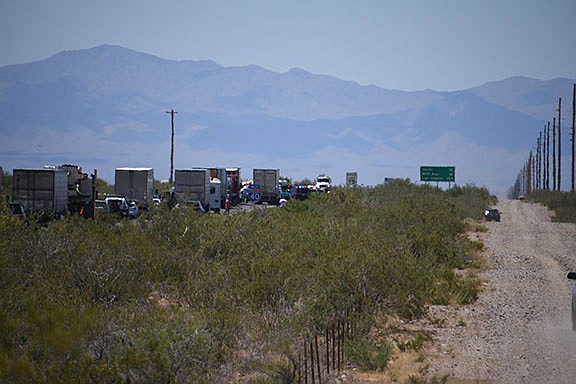 A wrong-way driver caused an accident at approximately 9:06 a.m. on Interstate 40 near milepost 36 Friday, May 24. (Photo by Vanessa Espinoza/Daily Miner)

KINGMAN – Interstate 40 westbound has partially reopened about 10 miles southwest of Kingman at milepost 36, with one lane now open.

According to the Department of Public Safety, a wrong-way vehicle was reported traveling eastbound in the westbound lanes near milepost 36.

Shortly after, a head-on collision was reported involving the wrong way vehicle. DPS confirmed that there are four fatalities.

Drivers should expect delays while crews continue cleaning up after an earlier crash. Eastbound lanes were unaffected.

One lane is now open on I-40 westbound. Expect long delays. There is no estimated time to reopen the second lane. #aztraffic https://t.co/UYAq6INaE3