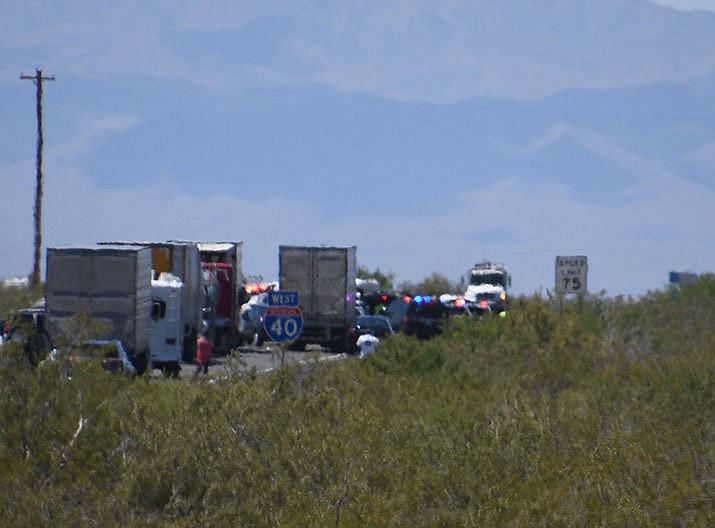 Traffic is stopped on Interstate 40 after a wrong-way crash Friday, May 24, 2019, near the Griffith Road exit. Arizona Department of Public Safety on Saturday, May 25 released the names of the five people who were killed in the collision. (Vanessa Espinoza/Kingman Daily Miner)

KINGMAN – Arizona Department of Public Safety has released the names of the five people killed in a wrong-way crash Friday on Interstate 40 near mile marker 36 about 15 miles southwest of Kingman.

His passenger, Ella Wickham, 90 of Laughlin, died at the scene.

Harold Wickham was driving eastbound in the westbound lanes and collided head-on with a black, 2015 Honda sedan carrying three people from New York.

All three died at the scene. Tsun Tong Chan, 57, was the driver of the Honda. Wai Kam Ngai, 54, and Ching Kwong Chan, 21, also were killed on-scene.

Yucca Fire Department and American Medical Response were first on the scene and requested assistance from Golden Valley Fire District.

The Nissan remained in the westbound lanes of I-40, and the Honda had rolled over into the median.

“There were parts all over,” Martin told The Daily Miner about what he saw when he first arrived on scene. “It wasn’t good.”

A CareFlight helicopter responded as well to the accident, but was not used as AMR took Wickham to KRMC.

The collision occurred at about 9:05 a.m. and initially closed westbound I-40. The highway first partially reopened, and is now completely open.

DPS said the crash is still under investigation and details will be released as they become available.