State offers $20M for interchanges, City must finance the balance 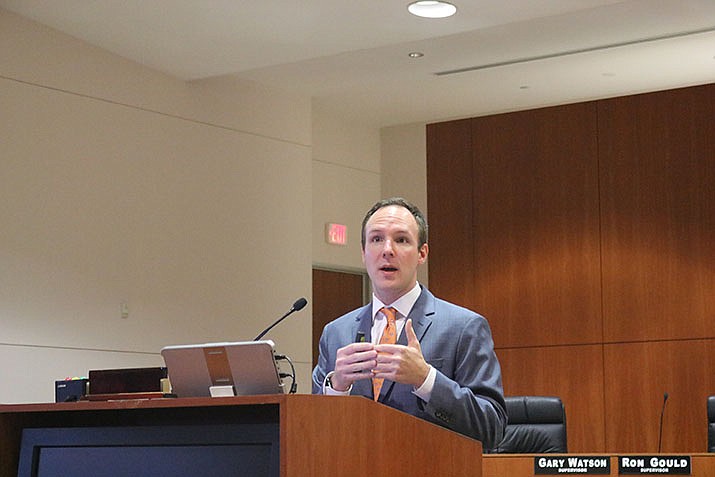 KINGMAN – It looks as if the I-11 East Kingman Connection Project could receive $20 million for “two interchanges in east Kingman” based on Gov. Doug Ducey’s proposed budget, however, there are two hurdles that must be overcome before work can begin.

The City wrote in a press release that Kingman and Mohave County as a whole will benefit from the Rancho Santa Fe Interchange.

“The Kingman Municipal Airport and Industrial Park currently provides 2,600 jobs and an annual payroll of over $101 million dollars to the regional economy,” the City wrote in a press release. “The interchange and connector roads will connect Kingman’s Municipal Airport and Industrial Park to I-40 and the future I-11 commerce corridor, creating access to thousands of acres of land for industrial, commercial and residential development.”

According to Capitol Media Services, the exact language from the proposed legislation reads as follows:

“The sum of $20,000,000 is appropriated from the state general fund in fiscal year 2019-2020 to the department of administration to distribute to the city of Kingman to construct new Interstate 40 traffic interchanges in Kingman east of State Route 66.”

While the City focuses on Rancho Santa Fe in the press release, according to the proposed legislation, the funds are for “interchanges,” plural. That could speak to the Kingman Crossing interchange.

However, there is some turmoil in the state Senate when it comes to the budget’s approval. The time frame for which victims of sexual assault can file a report has some elected officials at odds, which could affect the passage of the budget.

Another hurdle is that according to the legislation, the $20 million could be pulled if Kingman can’t find a way to finance the remainder of the interchanges. In fact, the funds won’t be distributed until Kingman has submitted a report saying it has raised enough money to fund the remainder of the project.

“The appropriation made in subsection A of this section shall not be distributed until the city of Kingman has submitted to the director of the joint legislative budget committee, the director of the governor's office of strategic planning and budgeting and the director of the department of administration a report that the city has raised sufficient monies to fund the remainder of the project's budget,” the legislation states.

If that report has not been submitted by June 30, 2024, the $20 million will revert back to the general fund.

“The City of Kingman is working with landowners on a public-private partnership that will address funding for the connector streets and utilities,” the City wrote.

The City also thanked Rep. Regina Cobb (R-Kingman), the Kingman and Mohave Manufacturing Association, the Western Arizona Council of Governments and others for their efforts on the matter.

“The reality that Rancho Santa Fe Interchange and Parkway can come to fruition at last is an outcome that can be celebrated,” Mayor Jen Miles said in the release. “I ask our citizens to encourage our state representatives to pass the FY 2020 budget now.”