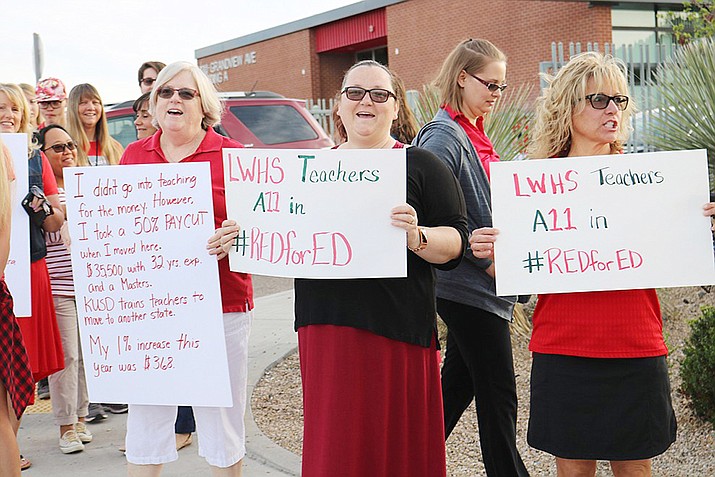 Arizona continues to have some of the lowest per-pupil spending on education in the nation, according to the latest numbers from the Census Bureau. The state has made improvements in recent years but still lags, which drove Lee Williams High School teachers to the streets last year in protest. (Daily Miner file photo)

WASHINGTON – New Census Bureau figures show that per-pupil spending in Arizona’s public schools was fourth-lowest in the nation in 2017, hampering the state’s efforts in recent years to improve education funding.

The report this week said that Arizona spent $8,003 per student in fiscal 2017, well below the national average of $12,200 that year and just over one-quarter the $23,091 spent per student in New York, the highest rate in the country. Only Oklahoma, Utah and Idaho ranked lower than Arizona.

The state’s ranking came despite the fact that Arizona increased its school spending from fiscal 2016 to 2017 at a faster rate than the nation, with school spending in the state rising by 5.1% compared to a national average of 3.7% that year.

Arizona educators and government officials said the state is heading in the right direction, but they were not surprised by the ranking.

“The District Additional Assistance funding has been diluted for so many years now, and we’re trying to increase that amount and move forward with teacher salaries,” said Heidi Vega, communications director for the Arizona School Boards Association. “But we still need more funding in our classrooms and for other things like social workers, nurses and counselors.”

The DAA, which provides funding for items such as textbooks, curriculum, technology, school buses and some capital funding, has been partially suspended since 2009, according to the Arizona Education Association’s website. 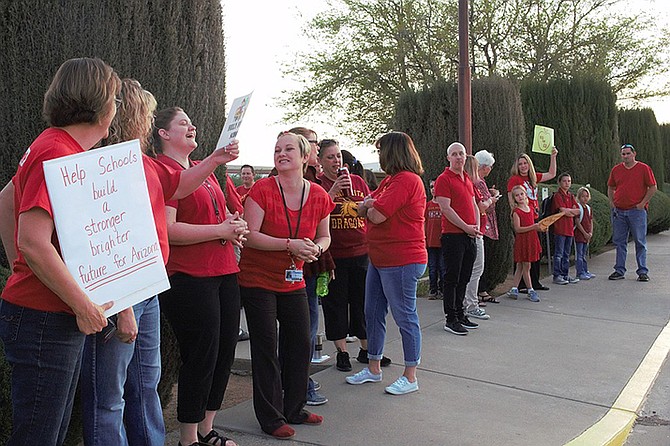 Manzanita Elementary School teachers displeased with the level of funding were out in force in April 2018. Gov. Doug Ducey’s budget request for education is at $5.6 billion, according to published reports, up from the $3.5 billion the Census said the state spent in fiscal 2017. (Daily Miner file photo)

It is one of several areas of school spending that Gov. Doug Ducey has targeted for increases in his proposed fiscal 2020 budget, which includes $164.7 million to give teachers a 5% raise. That would be the second installment on a 20% salary increase by 2020 that was promised last year when teachers staged #RedForEd rallies across the state.

The budget also includes $136 million to restore recession-era cut and $87.8 million for school buildings, according to a statement from Ducey’s office. It said that school spending has increased by $2.7 billion since Ducey took office in 2015, an increase in per-pupil spending of 25% in that period.

Ducey’s budget request calls for $5.6 billion in state funds for education, according to published reports, up from the $3.5 billion the Census said the state spent on schools in fiscal 2017.

Vega said those increases are vital, but that there are issues beyond funding that prevent children from getting an equitable opportunity and need to be addressed.

“Right now we see that there are gaps in Arizona,” she said, pointing to the high number of Latinos in Arizona schools. “Many times just looking at achievement scores, we’re being segregated by socioeconomics.”

Stefan Swiat, spokesman for the Arizona State Department of Education, said the state is moving in the right direction, but he says Arizona schools will not be able to make that jump right away without massive amounts of funding.

“This is why the superintendent ran for office. So we can see more dedicated revenue streams,” Swiat said.

He said Arizona has ranked in the bottom four states for per-pupil spending for at least the last five years, and that “Superintendent Kathy Hoffman is adamant about restoring pre-recession rankings.”

Vega said it helps that Hoffman “is working collaboratively with advocates and associations to get people together to close these gaps and help our children succeed.”

“We want to ensure that we use that voice among others to work with our legislators,” she said.