A funny thing happened at the striper tournament … 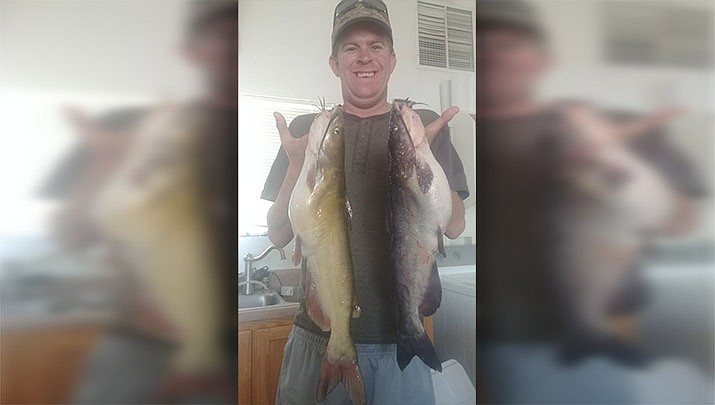 The last couple of weeks I have been writing about some very serious things Arizona sportsmen are going to be facing in the next few months.

This week, I decided to write about a something little less serious. It is about what I consider to be a funny situation that occurred at the recent Kingman Fire Fighters Association stopper-bass tournament at Lake Mead.

This is what happened to my friend and partner for that tournament, Kingman resident Ryan Asplin.

Asplin and I had decided to pair up for this annual tournament after Asplin and local physician Dr. Sadeh Sadeh, along one of the doctor’s friends from Lake Havasu, had a “monster” trip overnight fishing at Lake Mead near South Cove.

They caught a lot of fish, and many of them were well above the average striper that is caught at this Colorado River impoundment.

I also had several trips to my favorite spot in Lake Mead, but hadn’t done as well as Ryan had.

And so, with entry fees all paid, Ryan and I were team No. 19 in one of the best overnight fishing tournaments of the summer.

The tournament started at 4 p.m. May 17, but Ryan had to work so we got off to a late start.

We were on the water by 6 p.m. and headed for the location where Ryan had did so well.

But right away I had a feeling that maybe the fishing was going to be tough.

The South Cove area had just gone through a period of high winds and cold temperatures. The water temperature had dropped. When Ryan had done so well the temperature had been warm and the lake fairly calm.

The most pressing issue for me though was the moon. It was full. In my many years of striper fishing at night on Lake Mead, there have been only one or two times when striper fishing was any good when the moon was full.

Here is my theory about fishing on the full moon and why I don’t like it.

We put out HydroGlow submersible fishing lights out to attract the two kinds of plankton that live in Lake Mead.

These single cell organisms are attracted to light. Normally at night, when it gets dark, they sink to the bottom of the lake and are dormant. Our lights attract them and they swim up to it. The small minnows and shad then move in to feed on the plankton. The food chain is established.

However on full-moon nights, there is light all over the lake. Plankton moves up but scatters out. Minnows follow them and they are not drawn in to our lights like they are on the darker moon phases.

And I have documented evidence of the lower fish catches time and time again over the years I’ve been doing nighttime fishing trips on this lake.

So with this in mind, Asplin and I got set up and put lines in the water and waited for sundown. We started chumming with my “secret sauce.”

After the sun went down, we put out the lights and within a minute got a fish. But it wasn’t the striper we were after. Nope it was a pan-sized channel catfish.

Normally we catch about one catfish for every 10 stripers we catch. But this night things would be different, and for those of us who were in a striper tournament, it wouldn’t be good.

The moon came up and we noticed there were little plankton or minnows out around the lights.

The fishing wasn’t good either, with a bite about every 20-30 minutes.

And when we caught the fish that were biting, again it wasn’t stripers on the end of the lines. They were mostly channel cats.

As the night wore on, Ryan and I tried fishing at different depths. Thirty feet seemed to produce the most action, but almost all of the fish we were catching were channel cats.

That would be the pattern until about 1a.m. when Ryan dropped the bait to the bottom.

First he hooked up with a nice striper (I had three small ones in the boat), and then he caught a nice channel cat.

Thinking the stripers were on the bottom, that’s where I started letting my bait go.

Ryan was also catching cats, but his were much larger than the ones I was getting.

When I realized I had 20 whisker fish on ice, I decided I should look up the limit for them. In the previous 10 years, I had never caught more than about 10 catfish while striper fishing.

A check of the regulation revealed that the limit is 25 cats on Lake Mead.

Ryan ended up with 12 channel cats and a striper, and so we had 41 fish in the cooler.

Obviously, we were not going to be in any kind of contention for the striper prizes.

As it ended up, there were only four out of the 13 teams that had fished for stripers and brought in a limit.

Four teams didn’t even check-in the next day.

For Ryan and me, it was unfortunate there wasn’t a catfish division in the Fire Fighters’ tournament, for we might have won it.

But it had been another learning experience about fishing at night on the full moon on Lake Mead.

My best advice to anglers that want to go fishing on full-moon nights is this – DON’T DO IT!