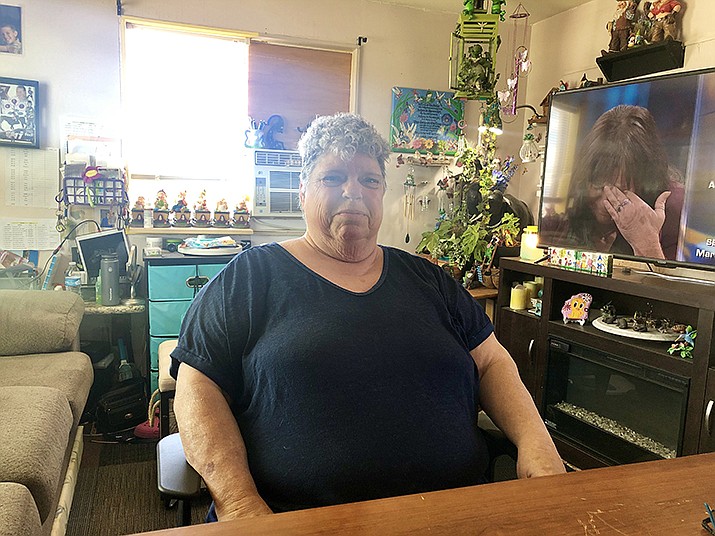 Linda Proctor says her doctors didn’t diagnose her Valley Fever until she suggested it to her third doctor. (Photo by Agata Popeda/Daily Miner)

KINGMAN – When a Golden Valley resident contracted Valley Fever, it took two months and three doctors to provide a correct diagnosis. Linda Proctor claims Mohave County is at least partially responsible for her condition because it doesn’t water the dirt road that runs in front of her house after grading it so it doesn’t get dusty. The county says it doesn’t have an obligation to water each time they grade and points at limited resources.

“You’ve got to love the desert to live here,” said Ronnie and Linda Proctor at their remote ranch at Garnet Road near the Black Mountains, which both her and her husband consider more beautiful than Hualapai Mountains.

The Proctors said they have been fighting the county for almost 15 years trying to make it water down Garnet Road each time they grade it. According to Ronnie, it is a state law and the county has to water down roads after grading in residential areas because of Valley Fever.

“It wasn’t a big deal at the beginning,” Linda said. “Because there was nobody out here. But people discovered it is a good shortcut from Laughlin to Oatman. The bikers all come down this road. And school buses. We are getting everybody.”

“Plus there are more people moving out here,” Ronnie added. “When I first came here, you were lucky if you saw one car a day.”

Linda has lived near dirt roads for nearly 27 years. Last year, she had pneumonia, which weakened her immune system. In February, she started to feel unusually tired. She couldn’t walk short distances. It took three trips to the kitchen to wash the dishes.

Her regular doctor took an X-ray of her lungs and suggested cancer. Sometime later, Linda was taken to an emergency room, complaining about chest and shoulder pain. The doctors suspected a heart attack, and after excluding that possibility, sent her home.

Linda wondered if she had Valley Fever after reading about it in the Miner. She went to her new doctor at Golden Valley Medical Center and requested to be tested for Valley Fever. The doctor called her last week to say, “Linda, you called it.”

The Proctors are frustrated with both the doctors and the county.

“They should’ve had tested me sooner,” Linda said. “Instead, they put me through all this scare: You got a cancer, you got a heart attack. And the county should water the road after grading so it doesn’t powder.”

“We manage 1,300 miles of gravel roads countywide. We simple don’t have resources to send out more water trucks,” he said.

Latoski said watering down after grading the county roads is not a law, neither at the county nor at the state level.

Rain damages Golden Valley roads, leaving some residents on their own
Golden Valley woman overcomes valley fever
Golden Valley is in the way
Repairs to weather-damaged roads coming together
Fevers up 56% in Arizona