Trump assails special counsel after he says president not exonerated 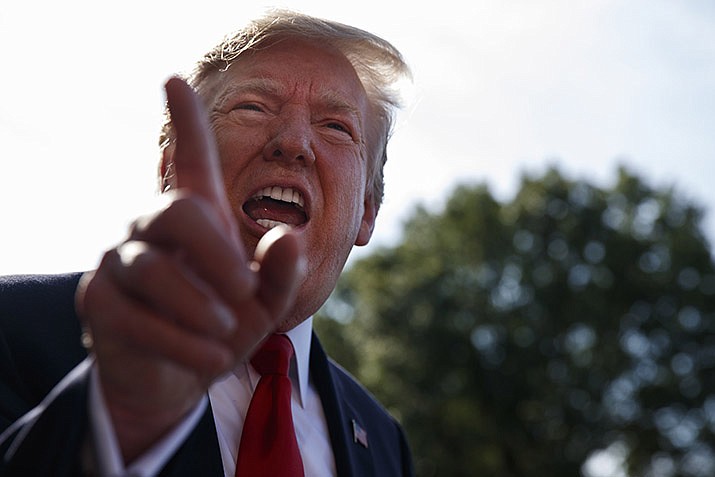 President Donald Trump talks with reporters before departing on Marine One for the Air Force Academy graduation ceremony, Thursday, May 30, 2019, in Washington. (AP Photo/Evan Vucci)

The president also offered mixed messages on Russia’s efforts to help him defeat Democrat Hillary Clinton in the 2016 campaign. Early in the day, Trump tweeted he had “nothing to do with Russia helping me get elected.” That was the first time he seemed to acknowledge that Russia tried to help his campaign. Then on the White House South Lawn, Trump told reporters: “Russia did not help me get elected. You know who got me elected? You know who got me elected? I got me elected. Russia didn’t help me at all.”

Mueller’s report said Russia interfered in the election in hopes of getting Trump elected, but his findings and intelligence officials have stopped short of saying the efforts contributed to Trump’s victory.

Trump’s 20-minute eruption underscored that he remains deeply distressed over the probe that has shadowed his presidency for nearly two years, even after Mueller announced his resignation and the closure of his office. Democrats are mulling the possibility of impeachment proceedings.

Trump insisted that he’s been tough on Russia and that Moscow would have preferred Clinton as president. But that’s not what Russian President Vladimir Putin has said. When asked last year in Helsinki whether he wanted Trump to become president, Putin replied: “Yes, I did.”

On Wednesday, Mueller, in his first public remarks on the Russia investigation, pointedly rejected Trump’s claims – repeated almost daily – that the special counsel’s investigation cleared him of criminal activity and was a “witch hunt.” Mueller emphasized that he had not exonerated Trump on the question of whether he obstructed justice, but said charging Trump with any crime was “not an option” because of Justice Department rules.

“If we had had confidence that the president clearly did not commit a crime, we would have said so,” Mueller declared.

Trump repeated his baseless claims that Mueller is “conflicted,” contending that Mueller, who served as FBI director under President George W. Bush, wanted his old job back, but that he had told him no. He said Mueller, a Republican, was “a true never Trumper” and “didn’t get a job that he wanted very badly.”

Mueller had been considered for the FBI director position shortly before being named as special counsel. But then-White House chief strategist Steve Bannon has said that while the White House had invited Mueller to speak to the president about the FBI and thought about asking him to become director again, Mueller did not come in looking for a job.

Trump also said Mueller should have investigated law enforcement officials who the president claims tried to undermine him. Mueller’s mandate, however, was to investigate Russian election interference, possible coordination with the Trump campaign and any obstruction of that investigation.

Among those whom Trump says Mueller should have investigated were members of the special counsel’s own team, including Peter Strzok, a former FBI agent who helped lead the investigation and exchanged anti-Trump text messages during the 2016 election with ex-FBI lawyer Lisa Page.

Strzok was removed from Mueller’s investigative team following the discovery of the texts and later was fired from the FBI. Page has left the bureau. Strzok told Congress that there was “no conspiracy” at the FBI to prevent Trump from becoming president.

Trump, asked about impeachment by Congress, called it a “dirty word” and said he couldn’t imagine the courts allowing him to be impeached. “I don’t think so because there’s no crime,” he said.

Mueller made clear that his team never considered indicting Trump because the Justice Department prohibits the prosecution of a sitting president. He and others have indicated that the next move, if any, is up to Congress, which has the power of impeachment. Trump has blocked House committees’ subpoenas and other efforts to dig into the Trump-Russia issue, insisting Mueller’s report has settled everything.