Jerry Gilligan testifies in his own alleged sexual assault case 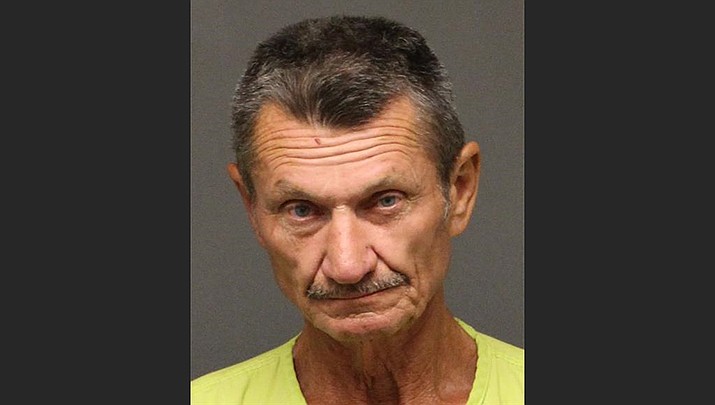 KINGMAN – Jerry Gilligan, 72 of Kingman, took the stand to testify in his own trial Friday, Nov. 1, and told the courtroom that he’s innocent of the crimes with which he has been charged.

Gilligan was asked by his attorney, Sandra Carr, about his history, including medical history and the history between himself and his then-wife, one of the case’s alleged victims. That medical history included Gilligan testifying that he has multiple health problems, one of which is in relation to his hearing.

The state alleges, and the woman testified, that she found Gilligan making her son perform oral sex on him in a shed out back around Sept. 14, 2016. The shed, Carr noted previously in the trial, has no air conditioning, windows or ventilation. Also, she said the door to the shed doesn’t fully close and flaps with the wind.

Also covered in Gilligan’s testimony was the matter reportedly involving battery acid. The alleged victim, during her testimony earlier this week, said that Gilligan had used an eye dropper of sorts to place battery acid in her eye while she and her son were “essentially prisoners in their own home,” as phrased by prosecutor Jacob Cote.

Gilligan said that’s not what happened. Instead, he said that he and his then-wife had been arguing over money. Gilligan said he had been a truck driver before a motorcycle accident made it so he could no longer work. Financial issues arose, and arguments began and escalated, he said.

In reference to the battery acid, Gilligan said it was his wife who tried to throw acid on him, however, he knocked it out of her hand, and that’s how it got in her eyes. He told a Kingman Police Department detective while at the hospital with his wife that the acid injuries resulted from the couple working on a car together. On Friday, he said he lied to the detective because he didn’t want his wife to get arrested.

Also addressed was a video that was shown to the jury Thursday. The state alleges Gilligan took the video, while at the same time instructing the alleged victims to perform sexual acts on one another and on himself. Gilligan said he did not take that video, and that the face and voice within the video was not him.

In summary, Gilligan said he never restrained either alleged victim, and never abused the 11-year-old boy.

“Yes, she sure did,” Gilligan responded when Cote asked if his former wife “lied about everything.”

“You bet he did,” was his next response when asked if the boy lied on the stand.

“The jury, they’ve been able to hear your voice for the last 30 minutes,” Cote said in reference to Gilligan’s testimony. “And after all of that you still expect them to believe that wasn’t your voice?”