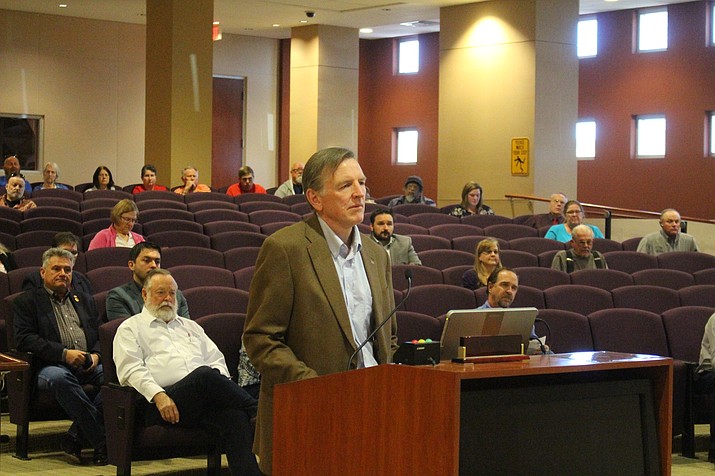 Rep. Paul Gosar speaking in front of the Mohave County Board of Supervisors in support of the resolution, Monday, Nov. 4

KINGMAN – Things are changing in this country at such a fast pace, warns Chairwoman of Mohave County Board of Supervisors, Hildy Angius, that “one day you’ll look around and ask what happened to my country and what happened to my rights? There’s traction to implement gun control laws even here in Arizona.”

Thus, Angius, moved by the example of Needles, California, decided to join this “movement” and proclaim Mohave County a “Second Amendment Sanctuary County.” All five supervisors approved of the resolution, supported by many speakers from the audience and Arizona legislators – Rep. Paul Gosar (R-Prescott) from the U.S. House and Sens. Sonny Borelli and Rep. Leo Biasiucci from the State Legislature.

“I hope other Arizona counties will join soon,” Angius said. The resolution doesn’t change anything, but is a “statement of fight,” a signal that if the U.S. congress or the state want to come take Arizonans’ guns, “they are up for the big fight.”

“The moment they ban guns, your sheriff will be an outlaw,” said Mohave County Sheriff, Doug Schuster.

Angius inquired the legislators on chances for Arizona to accept something similar to the Idaho nullification laws that nullify any federal law being imposed, and Borelli said, indeed, those things given a look.

“The right to bear arms is not given to you by the government,” Sup. Ron Gould of District 5. “Those rights are given you by God and then affirmed in the Constitution. God put you on this Earth to be free.”

All those statements were followed by an applause from the audience.

Discussing the resolution that doesn’t affect the existing law in the slightest and was followed by a unanimous vote, took over an hour.

The only person who spoke against the proposed item was Mary McCord Robison, the leader of local Democrats and herself a gun owner. Her only recommendation was to perhaps delay the resolution that is, according to her, politically divisive and redundant.