Could Kingman get a Foreign Trade Zone?
It’s a bit early to tell, but City Council and staff have started discussions 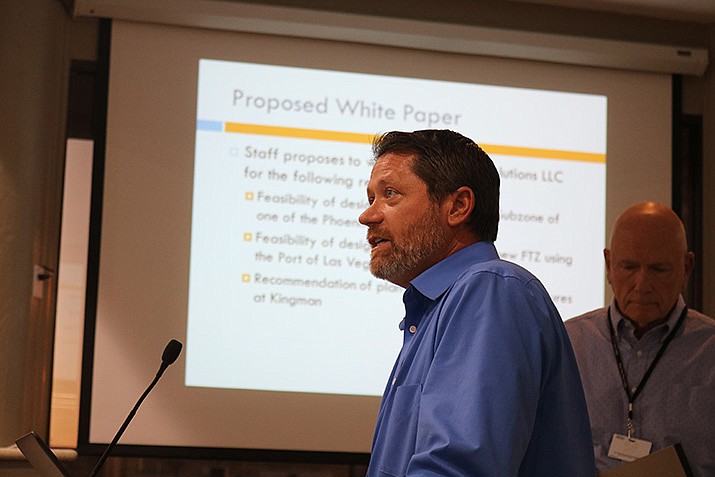 Staff provided City Council with a brief overview of Foreign Trade Zones and how they could be utilized by Kingman at the last regularly scheduled council meeting.

KINGMAN – The City has begun considering the advantages and disadvantages of Foreign Trade Zones, and whether creating one at the Kingman Municipal Airport and Industrial Park would be right for Kingman.

Staff provided City Council with a brief overview of Foreign Trade Zones and how they could be utilized by Kingman at the last regularly scheduled council meeting. City Economic Development Manager Bennett Bratley started that discussion by explaining what having a Foreign Trade Zone means.

“They are designated secure areas considered outside the U.S. Customs territory,” he said. “Goods that are received into foreign trade zones are generally not subject to duties or tariffs until, or if, they enter U.S. commerce for actual consumption of those products.”

Bratley said the main industries that benefit from FTZs are manufacturers, warehouses, distribution centers and third-party logistics providers. He broke that down further later on in his presentation by addressing FTZ usage specific to Arizona. Fifty-one percent were used for aircraft or spacecraft; 22% for consumer products; 12% for chemicals; 11% for electrical machinery; and 2% each for other electronics and other.

In 2017, Bratley explained there were 191 FTZs in the country with 329 production operations within them. The value of shipments into those zones total more than $669 billion, Bratley said. Warehouse and distribution operations received more than $259 billion in merchandise, and production amounted to more than $410 billion.

“In our area, we have certain targeted industries that we look at,” Bratley said. “Transportation distribution, manufacturing as well. When we do look at the zones, those numbers are important when it comes to whether or not it’s going to apply to us in the future.”

Should the City of Kingman seriously consider FTZs, it would have but two options for how to progress. First, Bratley said it could become a subzone of one of the seven that already exist in the state. The closest Foreign Trade Zones to Kingman are near the Port of Phoenix. The closest zone is 195 miles away.

The other option would be to create Arizona’s newest Foreign Trade Zone at the Kingman Municipal Airport and Industrial Park. Doing so would require Kingman to work with Nevada. “We would be subject to Arizona laws, but could use Customs for Foreign Trade Zones that can cross state lines through Nevada because of our proximity to that state line,” Bratley explained.

He continued by saying a new FTZ must be within 60 miles or a 90 minute drive of the perimeter of the port of entry. Kingman is about 90 minutes away from the most southeasterly point of the Port of Las Vegas.

But there’s much more work to be done and information to be collected before the City can take the next steps. Bratley said staff would like to see the City work with FTX Solutions, LLC to “take a look at our area and determine what would be the best approach if Kingman were to entertain or look into getting a Foreign Trade Zone.”

Overall, Bratley listed multiple benefits that can be realized through FTZs, including duty deferral, exemption, reduction and even elimination in the event merchandise is obsolete, damaged or destroyed as defective. What may, or may not, be utilized is a property tax reduction.

He explained Arizona offers about a 72% reduction in real and personal property taxes for FTZs.

“In order to get the property tax reduction, you have to have other entities such as school districts, community colleges, fire districts, those other taxing districts need to sign off in order to get that part of the reduction,” he said. “You can still go into a zone without those, which a lot of companies do because sometimes that’s the harder component …”