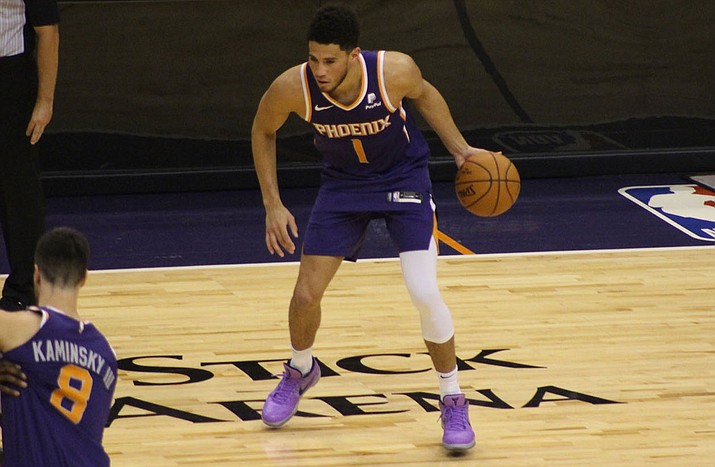 Devin Booker tallied 27 points and nine assists Sunday night as the Suns cruised to a 138-112 win over the Nets. (Daily Miner file photo)

PHOENIX (AP) – Ricky Rubio is a pass-first point guard. Sunday night, he showed he can score when the shots are there as well.

Rubio had a season-high 22 points, the most he's had since February of last season with Utah, and added 12 of the Phoenix Suns' 37 assists in a 138-112 rout of the Brooklyn Nets.

Devin Booker led the Suns with 27 points, shooting 10 of 14 from the field and making 4 of 5 3-pointers to go with nine assists.

"We moved the ball. We played super unselfish," Rubio said. "That is super fun to play."

The Suns shot 54 percent through three quarters, hitting 16 of 34 on 3-pointers, and cruised in the final period. They won for the fourth time in five games and ended the Nets' four-game winning streak in Phoenix.

Spencer Dinwiddie led the Nets with 18 points. Kyrie Irving finished with 15 points on 7-of-16 shooting.

"I don't think I shot one free throw, which is a tell-tale sign of just how aggressive I am not in the game," Irving said. "A lot of the accountability falls on me and really the game plan of guarding Ricky and not being in the right spots."

The flustered Nets trailed by 19 points, 32-13, with 4:35 left in the first quarter, having turned the ball over five times and been whistled for six fouls. Coach Kenny Atkinson was called for a technical foul for going out on the court to vent at the officials.

The Nets made it 42-40 on the third of Garrett Temple's three 3s off the bench as the Suns cooled off until the last half of the second quarter. Up only two, 46-44 at the 6-minute mark, Phoenix finished the quarter on a 22-6 run for a lead.

Oubre capped it off with a 3 from the top of the arc at the buzzer – part of his 16 points in the half – then jogged off the court with his arms raised.

"We came out connecting on all cylinders," Oubre said. "We move it around, it doesn't matter who scores as long as everybody touches it.

"What's not to like?" Suns coach Monty Williams said. "It was a big-time effort on our part to do what we do, share the ball. I thought Ricky set the tone."

Oubre, known for his energetic style of play, got the home crowd going after he took a hard foul from Jordan with 58 seconds to play in the first half and tumbled to the floor. Instead of getting up immediately, he did a couple of pushups, then walked to the free throw line and made both shots.

Sunday was the first game in Suns history where seven different players made two or more 3-pointers, according to the Elias Sports Bureau. That included all five starters.

Brooklyn: C DeAndre Jordan returned from a sprained left ankle that forced him out of the Nets' win over the Portland Trail Blazers on Friday night. He finished with 16 points and 12 rebounds. ... G Theo Pinson scored his first two points of the season.