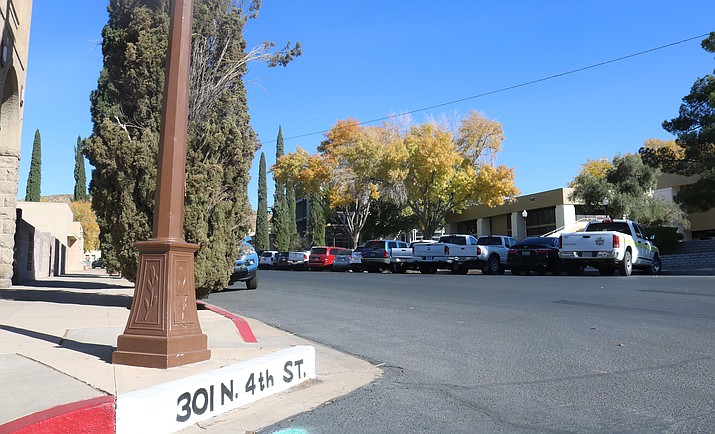 “If you pull up behind the curb and stop like you’re supposed to, that’s what you see in a lot of areas in Kingman,” said Commissioner Scott McCoy. (Photo by Travis Rains/Daily Miner)

KINGMAN – The majority of Kingman’s Planning and Zoning Commission seems to agree that lines of sight for motorists are obstructed at numerous intersections throughout town. Utility boxes, trees and more require that drivers pull halfway into the intersection just so they can see to turn safely, commissioners said.

For example, the sight triangle for a residence on a corner lot would encompass 25 feet in both directions from the corner curb. Twenty-five feet is the parameter used by the City of Kingman Zoning Ordinance for all sight triangles.

Within that sight triangle there are to be, ideally, no visual obstructions, with a few exceptions. Walls, fences and landscaping cannot exceed 3 feet in height within the triangle, and trees are only permitted if only the trunk is visible to a height of 8 feet. The latter does not apply to early growth stages.

Additional exceptions include buildings that existed before the sight triangle ordinance was adopted, utility poles and areas of the Historic Overlay District.

“So typically you’ll see a lot of traffic signal poles and control boxes within the sight triangle. It’s sort of unavoidable because the control boxes do need to be located near the signal, and right of way constraints often determine where the equipment can be located,” Ruggles said.

He added the City has worked with utility companies in the past to relocate control boxes.

“If you pull up behind the curb and stop like you’re supposed to, that’s what you see in a lot of areas in Kingman,” said Commissioner Scott McCoy, pointing to a picture of a utility box within a sight triangle. “And then when some of the trees, street landscaping matures, you can’t see through them.” 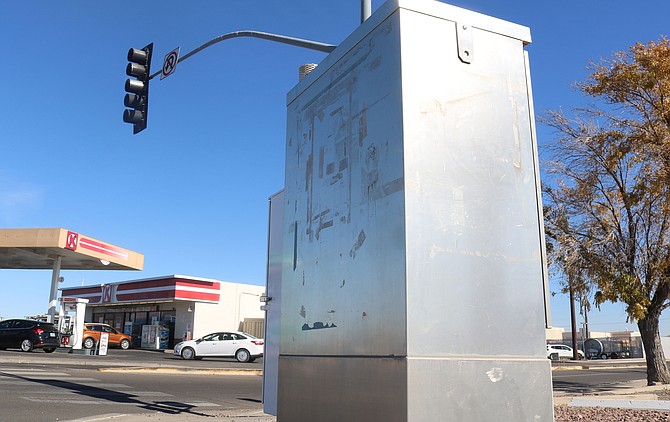 Planning Services Manager Rich Ruggles explained to the City Planning and Zoning Commission that traffic signal poles and control boxes being located within sight triangles can be unavoidable because they need to be located near the signal. (Photo by Travis Rains/Daily Miner)

Commissioner Laurie DeVries said the problem extends into residential neighborhoods, where some block walls are higher than 3 feet. She then asked about a plan of attack.

Ruggles said the City can ask its zoning ordinance update consultant for advice on how to proceed, in addition to looking at how other cities address issues with sight triangles. He again mentioned that the City could meet with utility companies, primarily UniSource Energy Services, to discuss relocating utility boxes.

Economic Development Director Gary Kellogg provided some insight having spent a few years in the utility industry. He said since utility companies have franchise agreements with cities, they are allowed to work within easements without permits.

“If we’re going to move these, it’s going to be a very interesting conversation with UniSource,” he said. “Because this is really expensive stuff.”

He said relocation of utility boxes is not without its challenges, but is worth the conversation.