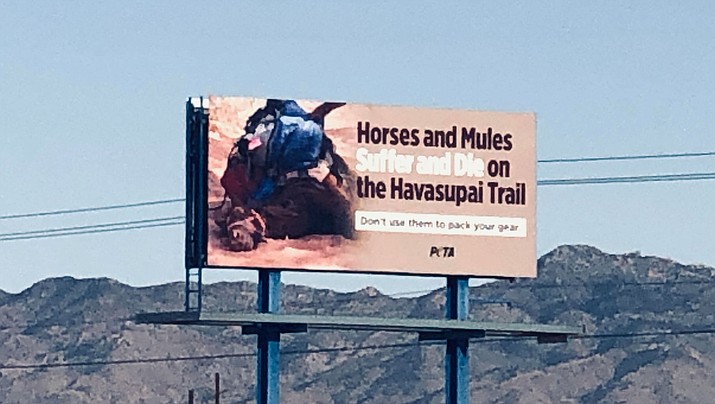 This PETA billboard on Highway 66 at Thompson Avenue near Kingman Airport claims horses suffer and die on the Havasupai Trail in the Grand Canyon. (Photo by Agata Popeda/Daily Miner)

Activists say horses suffer on Havasupai Trail – PETA is 100% correct on this horrific abuse. Horses and mules being beaten, kicked, starved, denied adequate water and literally worked to death. The federal government and Bureau of Indian Affairs should shut this tribal enterprise down.

Column: Republicans remain tethered to toxic Trump – We should have elected John Kasich or Mitt Romney in 2015. They are the true Republicans.

KUSD school bond – I’m not a California liberal Democrat, but a Republican that voted no on the school bond. Until we can give teachers back the opportunity to actually teach and hold children/parents accountable for bad behavior then there’s no sense in upgrading schools.

Trump kicks off Veterans Day dispute – Trump’s comments were superb. Loved him calling out the 90-year-old veterans and remarking with a grin how great they looked. Sad Trump haters can’t see this man loves America and he especially loves Americans. He gives us his all.

Soros wading into local race shows problematic influence – Ho hum. Conservatives are the original meddlers in other people’s politics. Conservative mantra is: “I know you are but what am I?” Shades of Pee Wee Herman. Get over it!

Veteran Parade – Thanks to everyone who participated in and/or watched our Veterans Day Parade.

Arizona establishes trade investment office in Tel Aviv, Israel – How much “funding” was and is going to be used for this money waster?

Now we have a Black Bear Diner, but what happened to Perkins?