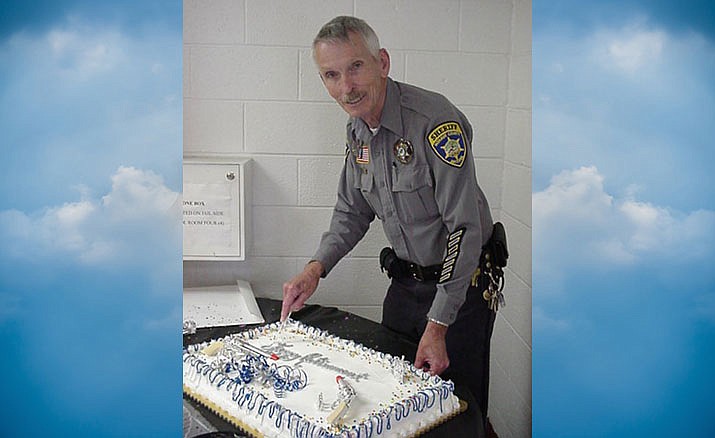 Gene Milam was born Feb. 16, 1937 in Cortez, Colorado. The first years of his life were spent in the log cabin his father built. He was the seventh of eight children born to Everett and Ruth Milam. The winter of 1936/37 was so severe that snow covered all the fences and even a horse couldn’t get through, so Gene’s dad had to deliver him.

The family moved to Kingman in 1946 and built a café called “The Kimo” which they operated until Gene’s dad became ill and passed away. When the rest of the family moved away, Gene, then 15, stayed in Kingman and worked for Charley McCarthy until he was old enough to join the Navy. He liked to tell how the day he turned 17 he was sitting on the courthouse steps in Prescott ready to join up.

He served at two Naval Air Stations with Crash, Fire and Rescue and aboard the USS Jefferson County - LST 845 during the Korean War. It was during his return to the states for discharge that he got his first taste of law enforcement when acting as military police he brought a prisoner back with him. That was the start of a career that was to last for 45 years with 10 of those years as a Justice Court judge in Lake Havasu City.

During his years with the Mohave County Sheriff’s Office he held many leadership positions such as the new SWAT unit, Search & Rescue, Range Master and was the Department Armorer as well repairing guns for some of the police departments and DPS. He also taught a course in law enforcement at Mohave Community College.

His last 18 years with the sheriff’s office were spent in Warrants and Fugitives which he liked as he liked to travel. Gene retired in 2007 but still kept track of the people he had worked with for so many years. Many of them stopped by or called to say hello and he always was happy to exchange “war” stories with them.

He also shared his life with Susie, his wife of 62 years. They were the parents of four children – Tim, Laura, Tammy and Troy Lee who passed away as an infant. He was Papa to six grandchildren and three great-grandchildren – Susan (Ryan), Sarah, Jacob, Travis, Troy, Tim, Noah Lee, Hayden and Delaney Marie.

He leaves one sister Mary Moore (Andy) of Stanton, Kentucky and numerous nieces and nephews whom he loved very much.

Funeral services with military honors will be graveside at Mt. View Cemetery at 11 a.m., Saturday, Nov. 16, 2019, with a Celebration Of Life following to be held at Lee Williams High School Auditorium with reception to follow.