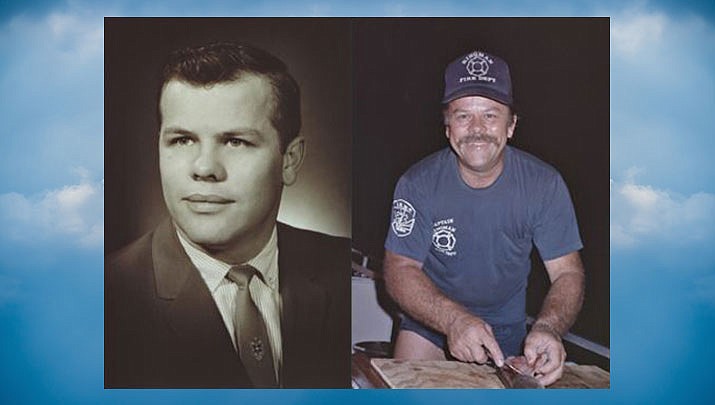 James Moore Mracek, 79, born in Clark County, New Mexico to Albert Francis Moore and Hazel Ann Mracek, left us on Nov. 4, 2019 to be with his Heavenly Father and children Joe, Albert and Marcus. He is survived by his sisters Miriam, Ann, and Donna; daughter Erin (whom he adored), grandchildren Shane and Toril, and great-granddaughter Leiden James.

The family will celebrate his life at a memorial gathering in the Hualapai Mountains in the spring of 2020 where his ashes will be laid on the soil at the cabin where he lived most of his life.

Jim’s parents moved to Phoenix in 1951 where he attended St. Mary’s High School. Jim later moved to Kingman, Arizona. He was a Farmers Insurance salesman, a Coors salesman, and he built and owned Gordo’s Mexican Food Restaurant in Phoenix. He was a Kingman fireman and paramedic, built his own cabin in the Hualapai Mountains south of Kingman, and owned and worked an alfalfa ranch by Trout Creek north of Wikieup, Arizona. He was a pilot, and sold aviation products for Chevron Oil.

Jim was an avid outdoorsman, hunter, boater, fisherman, builder, mason, welder, fabricator, and cook. He could do just about anything given the need. He had a huge network of friends because he was so well-liked by everyone who knew him. He had an unmatched sense of humor and a lightning fast wit. His copious quips were always preceded by a glint in his eyes and slight grin on his face. You never knew what would follow, but you knew it would be priceless.

Jim classifies as one of the most unforgettable characters you will ever know. He will be missed by friends and family, but will never be forgotten. Express condolences at www.whitneymurphyfuneralhome.com.