Let it pour: Kingman could see ‘abnormal’ amount of precipitation 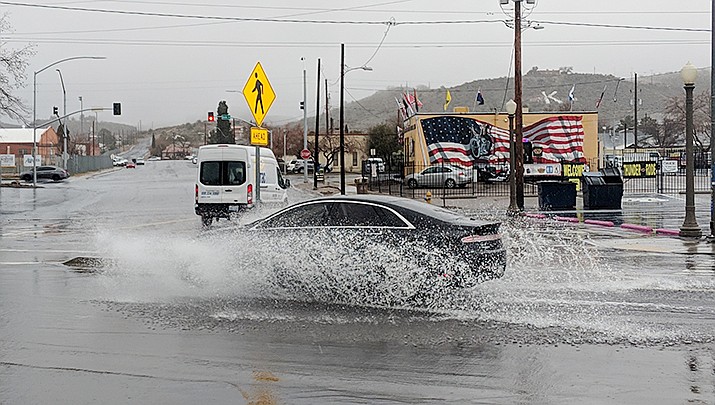 Clay Morgan, senior forecaster at the National Weather Service in Las Vegas, says now that the “wet season” is here, people should double-check their tires and wiper blades. (Photo by Travis Rains/Miner)

KINGMAN – Temperatures are forecast to drop and skies darken throughout the coming week in Kingman, with a more than 50% chance of precipitation forecast for Tuesday, Wednesday and Thursday.

Tuesday marks the beginning of a three-day stretch in which the National Weather Service says Kingman could receive between 1.5 and 2 inches of rain.

“We’re getting into our wet season,” explained Clay Morgan, senior forecaster at NWS Las Vegas. “You can argue it started a tad late, but it’s not abnormally late.”

What is abnormal, Morgan said, is the amount of rain that could fall on Kingman the next few days. He cautioned there will be a sharp cutoff between heavy rain and lighter rain to the northwest that could throw off the forecast.

Here’s what to expect.

There will be a slight chance of rain between 8–11a.m. Tuesday, and a 50% chance of showers or thunderstorms after 11 a.m. Winds could gust 21 mph.

The chance of precipitation will jump to 90% Tuesday night, a low around 49 degrees and wind gusts as high as 21 mph.

Rain on Wednesday is almost a sure bet, according to the NWS, with a 90% chance of precipitation. Rain is expected prior to 11 a.m., showers from 11 a.m. to 2 p.m. and then rain again after 2 p.m. Wednesday’s high will be around 56 degrees, with wind gusts up to 22 mph.

NWS forecasts a 70% chance of precipitation Wednesday night, with rain likely before 11 p.m. and showers likely between 11 p.m. and 2 a.m. More rain is expected after 2 a.m., as the temperature drops to around 41 degrees.

The 70% chance of precipitation will remain on a mostly-cloudy Thursday, Nov. 21 with a high near 53. Rain could continue after sundown, which will see the temperature drop to around 38 degrees.

“We don’t see anything immediately behind this one,” Morgan said of the surge in precipitation. “But this is a good time of year to check your tires, wiper blades, umbrellas, those kinds of things.”