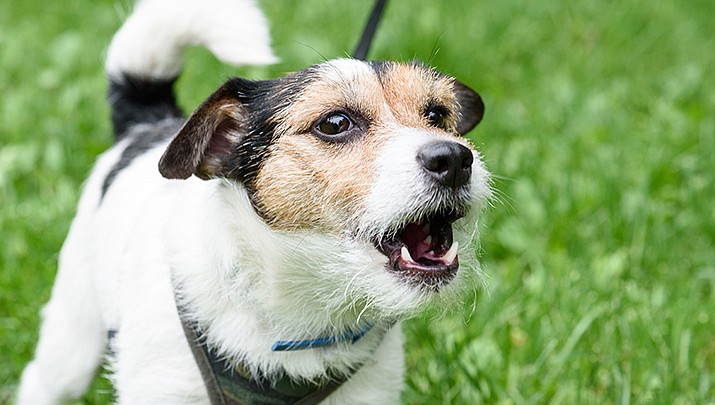 If the issue can’t be resolved by neighbors working together, disgruntled parties can contact KPD and say they wish to report a dog barking excessively. From there, an officer will be dispatched to handle the situation. (Adobe Image)

Do you think the first step in addressing excessively barking dogs should be to speak with the neighbor, or contact law enforcement?

KINGMAN – People love their dogs through thick and thin, but that sentiment can quickly dissipate when it comes to excessive barking from a neighbor’s pet.

“We just think certain animals are more prone to be more active when it starts cooling off and when it warms up,” Kurtze said. “They become more active.”

That could, in part, be a result of more people and other animals being out and about as weather becomes more forgiving, drawing attention from dogs.

Kurtze said during those times of increased calls KPD can receive four to five reports a day. How the complaints are handled depends on the situation.

“Most of the time we try to get in contact with the suspected house where the dogs are barking and let them know,” that there’s been a complaint about their dogs, Kurtze said.

To determine whether a dog’s barking is “excessive,” officers sit outside the reported residence to see if there is some sort of stimulus causing the dog to react, such as kids playing, people walking or cats running around the property.

“Typically, we’ll give them a warning, at first either verbal or written, and then from there if we actually observe a violation while we’re sitting there, if the dog is barking excessively for 15 minutes and there’s nothing causing the dog to bark, the officer can issue a citation,” Kurtze explained.

However, citations are rare, according to Kurtze. He said that in his approximately three years with Neighborhood Services, he has personally only issued about four citations for barking dogs.

The Neighborhood Services officer said there are steps neighbors can take to resolve the issue without having to call the department. He said neighbors can write the owner of the excessively barking dog a letter.

“Probably 80% of calls, the house getting complained on just wished their neighbors would talk to them and let them know first,” Kurtze said. “But a lot of people are scared to talk to their neighbors about anything, so they use us instead.”

If the issue can’t be resolved by neighbors working together, disgruntled parties can contact KPD and say they wish to report a dog barking excessively. From there, an officer will be dispatched to handle the situation.

Such violations are misdemeanors. A citation and associated fine can reach up to $250, Kurtze said.

For those who live outside city limits, Mohave County’s ordinance reads similar to that of Kingman.

“It shall be unlawful for an owner to keep or harbor, within the County of Mohave, any dog which barks, howls or makes other aggravating noises which unreasonably disturbs the peace and quiet of the neighborhood,” the ordinance reads.

Again, the associated charge is a Class 2 misdemeanor. People living in unincorporated areas of the county can contact the Mohave County Sheriff’s Office for animal-enforcement issues.