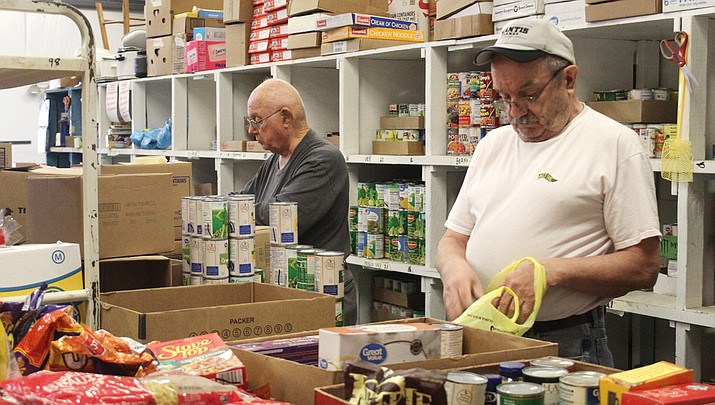 KINGMAN – At 8:02 a.m. on a Monday the tiny waiting room at the Kingman Area Food Bank is already packed and will be until closing at 12:45 p.m. This unassuming building at 2930 E. Butler Ave. – once a Mexican restaurant – is home to a massive operation that feeds 100,000 each year.

“This is how it works,” says food bank President Catherine Walker, immediately plunging into details. “The truck is about to go out to the stores. It will go to Bashas’, then Walmart, both Safeways and Smith’s. They will bring everything the store doesn’t want today.”

Then, the food is “processed” by volunteers, 30 of them regulars who, for various reasons, devote their free hours to help.

Fred Steffen is here a lot, responsible for canned goods and sorting them out by expiration date: tuna, tomatoes, coconut milk, corn and beans. Karen Rapue and Tina Marie Boanhauer are in charge of the produce; Tina Marie is singing to a song playing through one headphone. Next to them stands a giant container for fruits and veggies that, quoting Walker, “can’t hit the floor.” This colorful pile will be eaten by pigs, while local chicken farmers will get bags of greens. At the end of this masterfully planned food chain, there are two rescue parrots grateful for the fruits and broken nuts from the bank.

“The only thing you will find in my garbage is the wrappers,” said Walker, who came out of retirement three years ago to put her business management skills to work for the food bank.

In the other part of the building, people wait in line, show their IDs and “shop” with assistance from one of the volunteers. What and how much they get varies, but they leave with full carts able to feed their families for weeks. Sometimes they can choose (pick two breads and two sodas). Each family gets a bag of potatoes and a bag of onions.

All of it is offered in the holiday season on top of what the food bank delivers daily: meat, potatoes, vegetables and fruits.

“We need more cash, checks and volunteers,” Walker said. You can also donate to the food bank at the grocery store, for example at Smith’s. She admits she is worried about this year, due to tax changes. “Last year they moved the area for charitable donations from schedule ‘A’ to the 1040 form as an increase in standard deduction. So now when you write a check for the bank, it is not counted. You can’t write it off.”

As she talks, the door to her cramped office is opening and closing, people asking one question after another.

“Refuse it,” the boss advised.

A self-described queen bee managing her busy bees, Walker has two phones – a cell phone and a portable she carries with her wherever she goes. She doesn’t take nonsense from anyone: not from Phoenix when it ships rotten, wrinkly tomatoes she can’t put on the floor; not from those who don’t understand the bank is not designed to be anyone’s sole source of food.

The food bank doesn’t have money to advertise and send solicitation letters. Walker is also concerned locals give money to churches and organizations that will take those resources out of Kingman.

“This community needs us,” she said. “I’m talking about veterans with dementia. Or young single parents, often from broken families. And the level of mental illness. I’ve never seen anything like that in other countries.”

“The food bank is right there on the front lines of that problem, finding food and getting it to the people who need it most,” said TJ Finn, a nonprofit lawyer serving low-income clients, who also serves on the food bank’s board. “It’s unacceptable that anyone should go hungry when collectively we have such an abundance of food.”

Mohave County Supervisor Jean Bishop of District 4 joined the board in February 2018.

“There is a great need in this community,” she said. “The bank helps more than just in Kingman. I know they bring food to the community in Chloride, which is important.”

“One time I went to the waiting room,” Walker said, “and asked the people: ‘Is there something you need that we don’t offer?’ They said: ‘Toilet paper.’ It’s too expensive. So I went to Cascades Tissue Group and got toilet paper.”

Donations from individuals are also sought.

“Sometimes people just change their diet,” Walker said. “And they drop off everything they will not need at the bank. The only condition is: Bring something that you would feed your own family with.”

The food bank is open on Mondays, Tuesdays, Thursdays, and Fridays from 8 a.m. to 12:45 p.m. Each person is allowed to use the bank’s help once a month, but this help will typically consist of many meals.

There are no questions asked.

“I will never judge anyone,” Walker said. “Not those who drove here in a nice pickup because maybe they borrowed it to get here. And definitely not those who are afraid to come because somehow they were ‘raised better.’”

The Kingman Area Food Bank was founded in 1972 and is part of national program called Grocery Rescue. But it is dependent on private donations, especially during the holiday season.

Food Bank seeks donations, volunteers for holiday season
Much effort, much reward at Kingman Area Food Bank
Kingman Area Food Bank keeps on giving – and needs you to give too
Coming together: Community rallies to help those in need
Volunteers in a frenzy to provide meals to region’s struggling families
Event Calendar