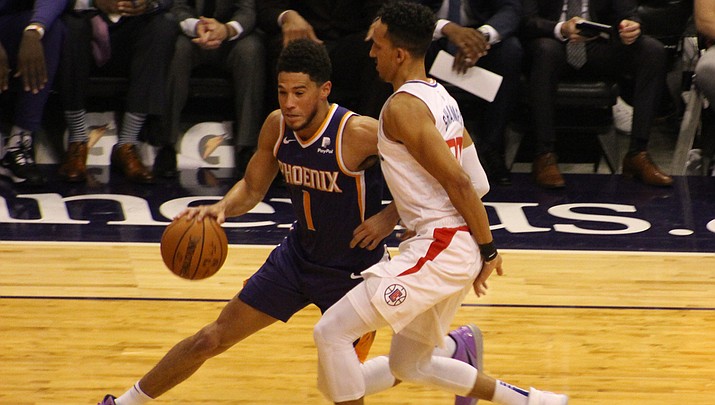 Devin Booker had 30 points, eight assists and five rebounds in a 120-116 loss to Sacramento on Tuesday night. (Miner file photo)

SACRAMENTO (AP) – For the second time in two games against Phoenix this season, the Sacramento Kings allowed the Suns to have a 70-point second half.

At least this time Luke Walton's team was able to overcome it. Barely.

"I know it didn't feel great the way we played in the second half but our guys stuck together and scrapped it out," Walton said. "Even though it wasn't pretty ... we gutted out a win. We'll take that and hopefully learning a lesson while doing it."

The Kings were terrible against the Suns in Phoenix during a season-opening 124-95 loss on Oct. 23. Sacramento committed 27 turnovers and was outscored 70-36 in the second half of that game.

This time, the Kings had 18 turnovers while Phoenix held a 71-58 scoring advantage after halftime.

"We have to finish it better and keep that lead until the end," Bogdanovic said. "They changed their lineup and everyone started rolling and we kind of let them do whatever. We kind of were, 'OK, we got it.' It's the NBA. You have to be ready to lock in and finish the game."

Richaun Holmes had 20 points and 15 rebounds, Nemanja Bjelica scored 17 points and Harrison Barnes added 15 for Sacramento. The Kings have won four of five.

"I loved the battle of our team and the way we came out at halftime," Suns coach Monty Williams said. "We changed up our defenses a little bit but they hit tough shots after tough shots. But I just loved the fight of our team. We stayed together."

Bogdanovic shot 11 of 14 overall and was 7 of 9 beyond the arc. He made four 3s and had 14 of Sacramento's 16 points during one stretch in the second quarter, then made three more from the perimeter in the fourth to help the Kings hold on.

But Bogdanovic spent the final few moments of the game on the bench with tightness in his left hamstring.

"I think it's cramped," Bogdanovic said. "I kind of felt it the whole second half but at the end it was a little bit harder and I had to go out. But it was OK."

Phoenix trailed by 26 early in the third quarter. The Suns were within 90-81 early in the fourth but couldn't stop Bogdanovic. The 27-year-old Serbian scored 11 points in the final 12 minutes, including his seventh 3-pointer that made it 106-91.

Phoenix made a final push to get within 116-113 with 14 seconds left before Yogi Ferrell and Holmes made two free throws apiece for Sacramento.

"It felt like after playing so unselfish in the first half, 17 assists, ball flying around side to side, it felt like to me that we started trying to stat-hunt a little bit," Walton said. "When we continued to run our plays we got wide open everything. When we got stagnant their zone stopped us."

The Suns were sluggish offensively early in their first road game since Nov. 2. Phoenix shot 26% in the first quarter and was marginally better in the second quarter.

Ricky Rubio had one point and two assists in 16 minutes. Rubio did not play in Monday's loss to Boston because of back spasms.

"The cause of desperation and energy and sense of urgency is what we needed to start the third quarter with," Booker said. "When you're down by 26 points it's a tough spot to be in."

Suns: Booker was called for a technical after getting fouled in the second quarter and had to wait before taking his free throws while Buddy Hield shot the technical. … Phoenix was whistled for goaltending three times.