Parade of Lights to be bigger and better than ever 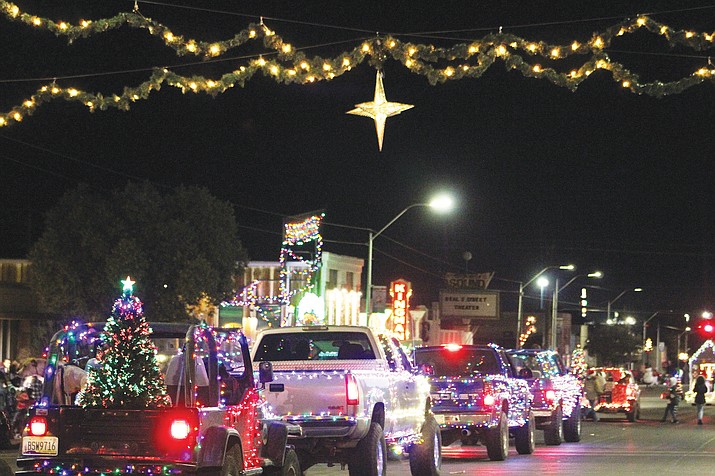 The 2019 edition of the Very Merry Parade of Lights will begin at 7 p.m. Saturday, Dec. 7 near Lee Williams High School. (Miner file photos)

KINGMAN – Each year, the Very Merry Parade of Lights sees the Kingman community come together for a night of wholesome celebration and comradery. The 2019 parade, event chair Joni Millin says, could be the largest ever.

This year the Kingman Very Merry Stars and Stripes Parade of Lights has a patriotic twist, falling on Pearl Harbor Day. Spectators can expect more red, white and blue on vehicles and floats than in years’ past. However, the holidays remain the main theme.

“A date which will live in infamy,” as phrased by then-President Franklin D. Roosevelt, was Dec. 7, 1941. Some 350 Japanese aircraft descended on the U.S. Naval Base at Pearl Harbor, according to https://census.gov/, leading the U.S. to enter World War II. Nineteen U.S. Navy ships, including eight battleships, were damaged or destroyed. U.S. military deaths totaled 2,403, and 68 civilians were killed.

So why has the Kingman Downtown Merchants Association paired this year’s holiday celebration with the historic and solemn events of Dec. 7, 1941? The answer is simple. The parade is held the first Saturday in December each year, and this year, that’s Dec. 7. But the merchants association still wanted to bring attention to Pearl Harbor.

“We always have the Christmas parade of lights on the first Saturday of December every single year since its beginning. This year, it just happens to fall on Dec. 7, which was Pearl Harbor Day,” Millin explained. “We didn’t want to shame ourselves by not recognizing that it is Pearl Harbor Day.”

The parade will begin at 7 p.m. near the staging area at the Lee Williams High School parking lot. Decorated vehicles and floats will head down Oak Street, turning onto Fifth Street before moving down Beale Street. Floats will then make the final stretch to Locomotive Park for the Kingman tree lighting ceremony. Don’t worry, Santa will be on hand.

There are 28 parade entrants to date, and people have until Nov. 30 to sign up. “We usually have a lot of last minute (entries), so we’ll probably get up into the 40s,” Millin said. “It’s probably going to be the largest ever.”

All participation forms are online this year in an effort to streamline the process. To sign up, go to http://www.kingmandowntownmerchantsassociation.com/events.htm and click on “Parade of Lights.”