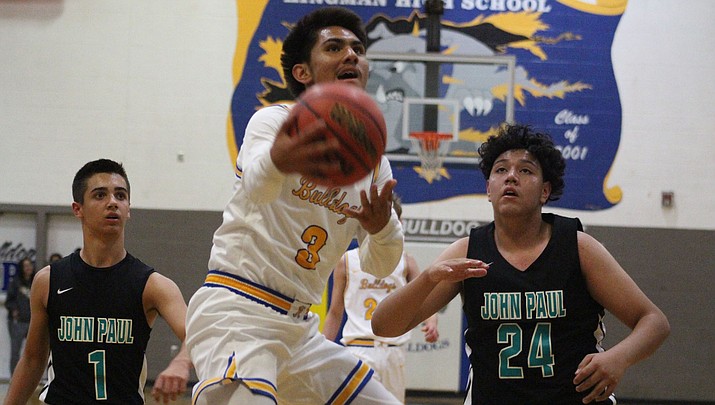 KINGMAN – There are no guarantees when a squad takes the floor for a season opener, especially in high school sports. Sometimes athletes are still adjusting to their teammates, but other times the chemistry is there.

The Kingman High School boys basketball team proved it is already meshing with a convincing 70-36 victory over St. John Paul on Monday night at KHS.

“I can’t be mad – we came out and executed exactly like we wanted to and got the win in the first game,” said Bulldogs head coach Nick Juby. “You always want to get a win in the first game. I know last year, we didn’t. And the year before that, we did. It’s always good to start 1-0.”

Gabe Imus led the way for Kingman with a game-high 16 points, while Rider Havatone scored 13 and Eddie Howery and Jacob Martel each chipped in 11 points.

But Kingman also showed its skills on the other side of the court.

“We came out locked in defensively,” Juby said. “We were really rolling on that and that’s something we’ve been preaching since the summer. We knew we were going to hang our hat on our defense, getting run outs and things like that. I was really pleased with that first quarter and how well we played.”

The Bulldogs jumped out to a 23-6 advantage after the opening quarter and led 41-22 at halftime. A big part of the offensive outburst was 3-point shooting as Kingman nailed six in the opening half, with Imus sinking half of those.

“We will D up and we will look to run, but if you give us a little bit of space, we will fire the 3s up there,” Juby said. “This year we probably have more 3-point makers than last year when we just had 3-point shooters.”

When it was all said and done, Juby was right as the Bulldogs made nine treys in a game that they led from start to finish. 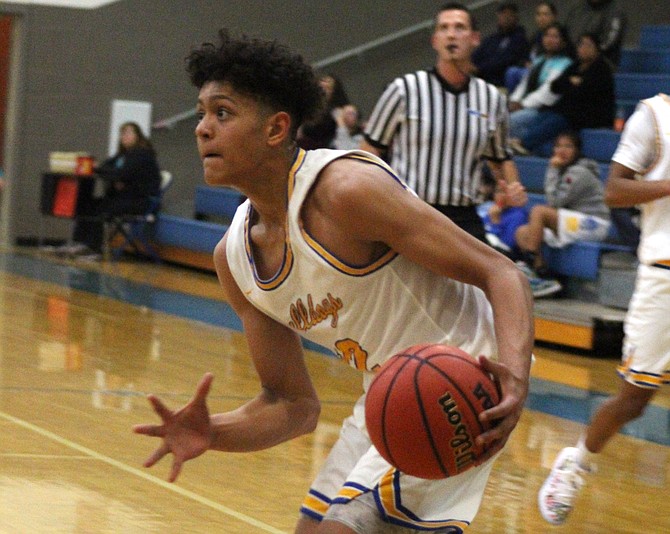 However, the win was overshadowed by emotions boiling over midway through the second quarter. The minor commotion resulted in four Lions and two Bulldogs – David Lopez and DeShawn Rahn – being ejected from the game.

“That’s one of those situations where we have to learn to keep our composure a little better,” Juby said. “Martel got that dunk and he was really hyped up. And the kid (on St. John Paul) was mad because we were putting it on them really well. He shoulder checked him and Martel got mad. I wanted to run on the floor and grab him just to pull him away. I’d have taken the technical at that point. It is what it is, unfortunately.”

It appeared that was the end of the situation, but Martel was ejected with 6:07 remaining in the third quarter after receiving his second technical foul.

“It’s unfortunate Martel got the second one,” Juby said. “I didn’t realize he had got the first one. I didn’t know (the officials) had given technical fouls to both players. If I knew he had that first one, I wouldn’t have played him. I would have sat him.”

Kingman will now be hurting as Lopez, Martel and Rahn can’t take the floor when the squad makes the short trip to Lee Williams at 7 p.m. Tuesday. The Vols picked up a 68-58 win last year at KHS and lead the all-time series 9-2.

“It will be a fun one,” Juby said. “It is always a fun one when we go play over there. I love that in-town intensity that it brings. I love playing in our gym, but you go over there and it’s nice and tight. The intensity just ratchets up a little more. It should be a fun one.”