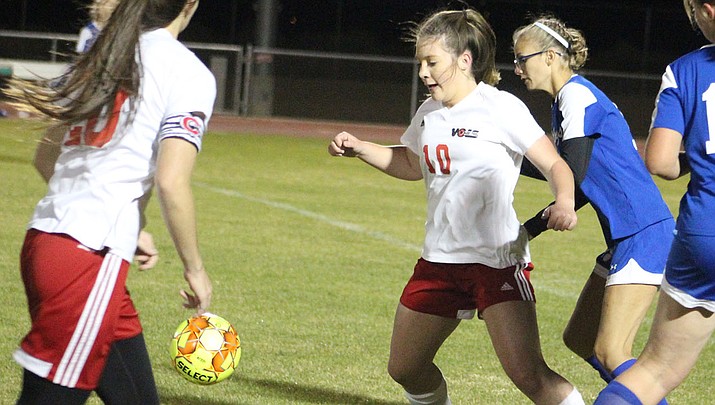 KINGMAN – The Lee Williams High School girls soccer team started off the 2019-20 season with a bang Monday as it defeated Lake Havasu 4-1.

The Lady Vols responded with four unanswered goals for the victory after Lake Havasu opened the scoring.

Lee Williams took the lead in the second half when Kendra Pease threaded the ball through the defense to Mackenzie Cathey for a score. Pease added a goal on a penalty kick for a 3-1 advantage and Cathey tallied her second goal on an assist from Tina Laegdhelm for the final tally.

Grace Otero scored Lee Williams’ lone goal in the first half, but it was enough as the defense stepped up.

At Mohave, the Tigers opened the season Monday night with a 60-48 win over the T-birds.

Kingman Academy (1-0) traveled to Lake Havasu (0-0) Tuesday and will play in the Ben Franklin/Gilbert Christian Thanksgiving Classic in Phoenix on Friday.

At Mohave, the Lady Tigers dropped a 49-28 setback in their opener Monday against the Lady T-birds.

At KHS, the Bulldogs managed just one goal Monday in a 9-1 loss to the visiting Knights.