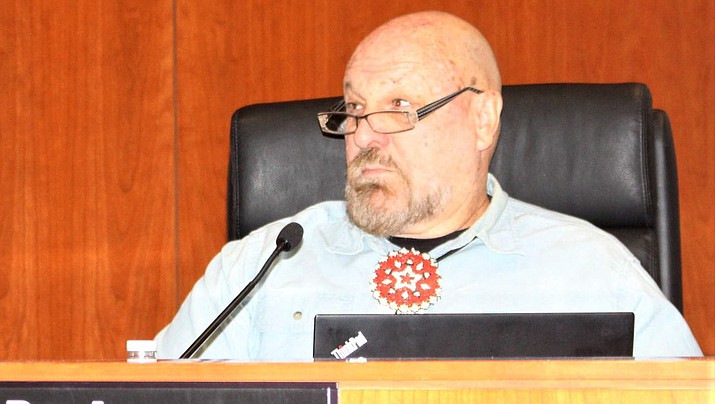 KINGMAN – Giving a report to the Mohave County Board of Supervisors on Nov. 18, Supervisor Buster Johnson said he continues to work with White House staff to open new uranium mines in Arizona.

The supervisors, along with Congressman Paul Gosar (R-Prescott), favor restarting uranium mining in Mohave County. They estimate new mines could pump $29 billion into the regional economy over time and provide 2,000-4,000 jobs for Arizona and Utah.

But the Democratic U.S. House approved a prohibition on new uranium mines on about 1 million acres of public lands around the Grand Canyon, an attempt to make a temporary 2012 ban permanent. The 20-year ban has not yet made it to the Senate floor for a vote. Local governments in southern Utah join the Mohave County board in opposition to the ban, which U.S. President Donald Trump has promised to veto.

By “the White House staff,” Johnson told The Miner in a phone interview on Friday, Nov. 22, he meant he’s been working with Secretary of State Mike Pompeo. Earlier this month, Pompeo pledged to cancel one of four sanctions waivers on Iran that had allowed foreign companies to work with Iran’s civilian nuclear energy program without U.S. penalties.

The change would take effect on Dec. 15. and – according to Johnson – will be a step toward bringing uranium mining back to Mohave County.

The hope is that the Trump administration will mandate that uranium be produced domestically, which could expedite the issuance of permits to mine uranium on public lands. Uranium is essential to operating nuclear power plants, manufacturing atomic weapons, and other defense purposes.

The issue has become political. Gosar alleged in June that the Democratic effort to keep the ban is meant “to serve Russian interests in cornering the uranium market.”

The nuclear energy industry also is pushing the Trump administration to allow more domestic uranium mining, citing national security concerns and the 1950 Defense Production Act. The same argument was used earlier this year to add uranium to a list of critical minerals.

“What might save us is if Trump mandates that we buy domestic uranium,” Johnson said. “That would open the door” to new uranium mines in Mohave County.

But the door seems to already be open. As of Nov. 25, HR 1373, the bill to maintain the mining ban around the Grand Canyon, was still waiting to be brought to the floor in the Republican Senate, which is unlikely. If approved, according to a White House statement dated Oct. 28 opposing the bill, Trump’s advisers “would recommend that he veto it.”

Market-driven uranium mining ceased in the U.S. decades ago, with domestic producers unable to compete with bigger, international uranium importers. Canada, Australia and Kazakhstan also were able to offer a higher-grade uranium.

“We have a high-grade of uranium in Mohave County,” Supervisor Johnson said. “The better the quality is, the less of it you need.”

Johnson claims modern mining technologies are safe to the environment and the Mohave County Supervisors agree uranium mining would not be harmful to the local environment or the Colorado River.

“There is no danger,” District 1 Supervisor Gary Watson said in June 2017.

“We would be helping our country,” Johnson said, “and building our uranium independence. We can’t rely on importing from Russia. And it will take us 2 to 3 years to start getting results, anyway.”

According to the U.S. Energy Information Administration, 90% of the 40 million pounds of uranium ore the U.S. purchased in 2018 was imported, including 24% from Canada, 20% from Kazakhstan, 18% from Australia and 13% from Russia.

However, unlike natural gas plants that need on-time supply, American nuclear power reactors run about 18 months before refueling is required. Also, uranium used for defense purposes (nuclear weapons and the U.S. Navy’s nuclear submarines and aircraft carriers) must be domestically sourced and processed at U.S. conversion and enrichment facilities.

While domestic nuclear power plant construction has ground to a halt in the past 30 years, the U. S. remains the world’s largest producer of nuclear power, generating about 30 % of nuclear power production globally. There are currently 98 commercial nuclear reactors in the U.S., and another 450 worldwide.

The claim that stocking up with uranium is a matter of national security is not strong given that the U.S. is overstocked with uranium and good for the next 100 years, according to the 2019 report of the U.S. Uranium Committee of the Energy Minerals Division.

According to the U.S. Department of Energy, the domestic uranium inventory meets all current government requirements and the most-immediate need for domestic uranium is for tritium production for nuclear weapons around 2038 and for naval reactor fuel in 2060. Currently, commercial uranium stockpiles in the U.S. are almost double what they were in 1995, and U.S. allies Canada and Australia – not Russia -- continue to supply the most uranium to U.S. reactors.

But how does Iran, and sanctions against its uranium suppliers, fit into this picture?

Johnson did not want to go into details of how the Iranian inability to import uranium could translate to new uranium mining in Mohave County.

He said only that the expected Dec. 15 move announced by Pompeo will make importing uranium more difficult for Iranians, Johnson said.

The main buyer of local uranium, at least theoretically, would be the U.S. government itself, although the government could purchase more domestic uranium and help to export it abroad.