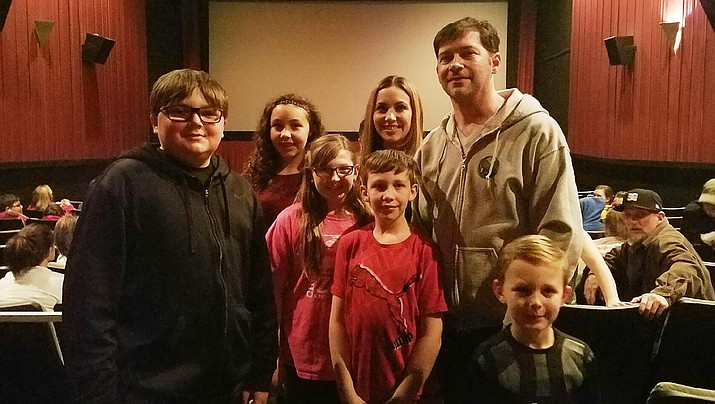 Scott Preston of Kingman, right, poses with some of the children who took advantage of his free ticket offer for a prior Star Wars movie opening. (Miner file photo)

KINGMAN – Scott Preston is inviting each and every one of you – or at least the first 284 of you – to the movies.

The Kingman resident and owner of Preston Investments has bought every ticket for the first two showings of the new Star Wars movie in Kingman. And he’s giving them away.

So if you want to see “Star Wars: The Rise of Skywalker” at Brenden Theatres Kingman 4 on opening night all you have to do is pick up the tickets and promise to have a good time.

Go to Preston Investments at 4345 Stockton Hill Road during regular office hours – 8 a.m. to 5 p.m. Mondays through Fridays – to pick up your pass.

Just a few rules. Limit your request to your family. No scalping. And Scott Preston enters the theater first, and gets to pick his seat.

It doesn’t seem too much to ask, for a man who splurged for 284 tickets at $9.21 apiece, and has never missed a Star Wars movie.

Scott has been a fan for life. He was 5 years old when the first Star Wars movie was released in 1977, and still counts the original trilogy as his favorites.

This will be the third time Preston has sprung for the entire crowd for a Star Wars opening in Kingman. And his wife, Emilie, couldn’t be happier. “I married into it. I enjoy it,” she said.

The feedback, as you might expect, has been positive. “We have kids coloring us pictures. People will come up in the movie and say ‘thank you,’” Emilie recalled.

“We try to do a lot for the community,” Scott Preston explained.

“I think it’s awesome that he does this for the community,” Lochner said. “Many people aren’t able to come to the movies with their kids because of the cost to take your family.”

Local business man wants others to share in the ‘Force’
Is this the biggest 'Star Wars' nerd in Kingman?
Rogue 161? Preston donation part of 'the season of giving'
‘Star Wars’ fan shares the force
Star Wars: The Fandom Awakens
Event Calendar