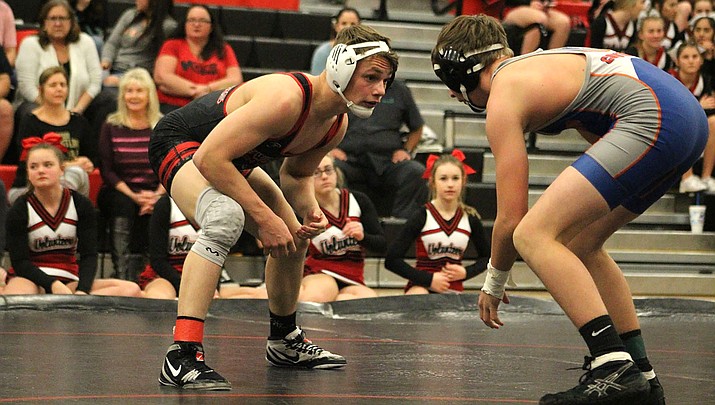 KINGMAN – There are no guarantees in wrestling. Athletes can show up and work hard, but the squad can struggle to find success.

The Lee Williams High School wrestling team knows that firsthand, but the Vols have overcome adversity and sent grapplers to the state tournament six seasons in a row.

“We’re looking to just build on the success that we’ve built upon for the last six years,” said Lee Williams head coach Dan Ondrejka. “Our numbers seem to get smaller and smaller every year, but we keep getting bigger and bigger hearts. We want to grow upon that – really try to bring in and attract younger kids and teach them the ropes.”

The youth movement was on display a year ago as Zach Dixon and Payton Wayman made their first appearance at the Division III State Championship.

The duo joined Jimmy Wayman, who made his mark at state with a third-place finish. And he already had his sights set high during the summer.

“State championship – got to have it this year,” Jimmy told the Miner in July. “As long as I stay at the pace I’ve been training, I know I’ll have it.”

Jimmy is ranked No. 1 at 152 pounds entering his senior campaign, but he isn’t the only one who is expected to shine during the 2019-20 season.

“I do think kids look up to Jimmy, and they look up to our other state qualifiers, too,” Ondrejka said. “They see the success we have in this program and say, ‘Hey, if we buy in to this, we can be successful.’ We have a lot of our heavier guys buy in this year. I’m really excited to see the heavier end of our lineup do better than they have in the past.”

Lee Williams gets it chance to do that at 2 p.m. Wednesday with a trip to Bradshaw Mountain to battle Seton Catholic Prep and the host Bears. That will start a long journey to state with a few fun stops along the way.

“We’re really excited to go back to the Doc Wright Invitational this year,” Ondrejka said of the Jan. 17 tournament. “There are 43 teams on the docket from four or five different states. It’s going to be a really big one that really challenges some of our kids later in the season.”

The season also poses challenges to coaches, but Ondrejka won’t be on his own. He has a pair of familiar faces to help him weather the grueling year.

Bulldogs hoping to take the next step

The toughest feeling in sports is being right on the brink of a trip to the postseason, only to find out you didn’t make the cut. The Kingman High School wrestling team experienced that despair a year ago, but the Bulldogs plan to use that as motivation.

“I think they’re a lot more hungry, especially the ones that just missed it,” said Kingman’s head coach, who declined to have his name printed. “We also had some bad injuries at the end of last year that kind of cost a couple of them.”

However, the Bulldogs aren’t focused on making excuses. Instead, the game plan is to give 100 percent no matter who is watching.

“It all boils down to them,” coach said. “How much do they really want it?”

Kingman returns four grapplers from last season, including three seniors. There are also three Lady Bulldogs joining the ranks after Kingman ended last year with three girls on the roster.

“We’re in shape and we have a lot of young talent,” coach said of the team’s strength. “We only have three seniors and everyone else is underclassmen. I think I only have one junior on the entire team. It’s a young team, but we have some good strengths.”

The Bulldogs hit the road Wednesday to kick off the 2019-20 season against Snowflake and Mingus, but that won’t be as big as Saturday’s trip to Bullhead City.

“We’re looking forward to the Mohave Tournament coming up during the weekend after Thanksgiving,” coach said of the SMASH Nationals. “It’s always an interesting tournament because you get a lot of teams out of Phoenix, California and out of Vegas.”

But at the end of the day, coach won’t know how the team will fare until later in the season.

“That’s the coin flip – you never know what you’re going to get until you get a couple of weeks in,” he said. “After a couple of matches and tournaments, you kind of find out who’s really wanting to go and who’s kind of not.”