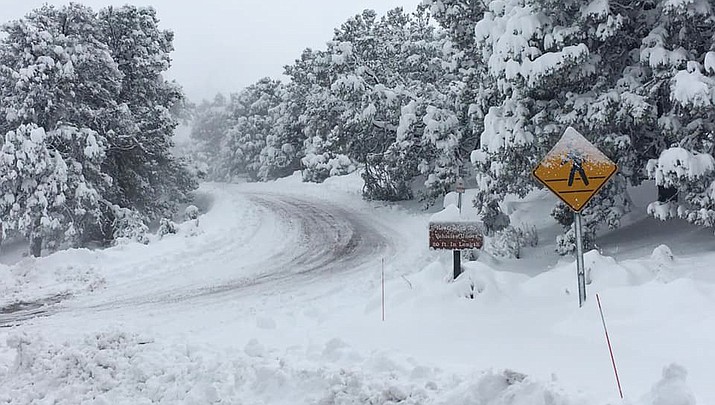 The winter storm in the Grand Canyon area has forced the town of Tusayan to declare an emergency. This photo shows a road in Grand Canyon National Park. (Public domain)

FLAGSTAFF (AP) – A town just outside Grand Canyon National Park has declared an emergency because of power outages and severe weather.

The Red Cross set up a shelter inside the national park and is offering a shuttle.

PAYSON (AP) – Authorities are searching for three children who went missing when the vehicle they were in was swept away by floodwaters in Arizona’s Tonto National Forest.

The Gila County Sheriff’s Office says the possible motorhome was swept away after trying to cross a creek that was closed around 4 p.m. Friday.

According to multiple news media reports, two adults and four kids got out of the vehicle, but three remained inside.

A state Department of Public Safety helicopter was assisting in the search.

There were heavy rains and flood warnings in much of north-central and northern Arizona Friday as storms appeared all over the state.

PHOENIX (AP) – Police say a man was found shot to death at a Phoenix park.

Police said officers responded to Lindo Park on the south side of Phoenix on Thursday and found 24-year-old Ervin Harris mortally wounded.

Police said Harris was shot when he had an altercation of some kind with a group of people that the report only described as males.

Sgt. Maggie Cox said police were trying to identify the suspects whom she said left the scene in a dark-colored car.

New memorial for customs officers killed in shootout in 1974

SONOITA (AP) – Federal officials will honor two federal law enforcement officers who were killed in a shootout with a drug smuggler in southern Arizona 45 years ago.

The men, Louis D. Dixon and Charles J. Bokinskie, worked for the now-defunct Customs Patrol agency and were working near Sonoita, Arizona, when they were killed on April 25, 1974.

Two teenage girls found their bodies the next day.

U.S. Customs and Border Protection officials plant to unveil a memorial marker near the location of the killings with a ceremony on Tuesday, Dec. 3.

The suspected drug smuggler with whom the lawmen were engaged in the 1974 shootout also died.