Trumpstock: ‘The joy of being American' 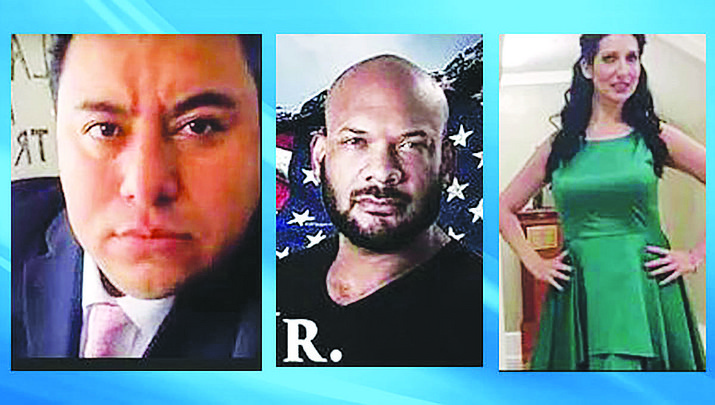 Organizers pointed out they have minorities among the speakers at Trumpstock, such as. from left, Marco Gutierrez, the founder of Latinos for Trump, Avid J. Harris Jr., a black conservative from Texas, and Alexandra Levine, who represents the group Jews for Trump. (Courtesy photo)

KINGMAN – With some changes in pricing, program and speakers, Trumpstock, the festival “to celebrate the joy of being American” will be held this weekend in Kingman.

“There is no country more beautiful and wonderful than the land of freedom and opportunity,” organizers Laurie Bezick and Jodi Larson wrote on the event’s website. “Ever since our president won the 2016 election, we supporters have been falsely accused of crimes, silenced on the social media, attacked for our beliefs, called horrible names, had our families threatened, and have had liberals nonstop attempt to divide us! We say enough is enough!”

Organizers pointed out they have minorities among the speakers, such as Avid J. Harris Jr., a black conservative from Texas and the author of the book “Why I Couldn’t Stay Silent,” which promises to challenge everything you believe about racism in America. Others include Alexandra Levine, who represents “Jews for Trump” and praises the president’s support of Israeli Prime Minister Benjamin Netanyahu, and Marco Gutierrez, the founder of Latinos for Trump, who thinks the spread of Latino culture in the U.S, if it is not stopped, will lead to "taco trucks on every corner."

Other guests include John Bernstein, a conservative talk show host and self-proclaimed “Master of Ceremonies for political activities,” and Brian Talbert, a gay conservative who founded Deplorable Pride in North Carolina and speaks against Muslims and transgender individual in the military.

Locals will include Conservative Republican Club of Kingman President Dr. Lawrence Schiff, and Mohave County Fairgrounds Manager Tim Woods, who is running for the Mohave County Supervisor District 1 seat in 2020.

The opening ceremony starts at 6 p.m. Friday. Saturday and Sunday festivities start at 10 a.m., and include a keg roll, a slow drag and Weenie bike contest.

VIP passes are available to the first 100 people at $75, which includes drinks, food, access to DJ Jazz performance, and karaoke. Camping spots cost $60 and RV spots $125 with tickets purchased online.

The organizers promise similar events in Florida and Texas next year.