Prep Football: Bulldogs focused on the big picture as they welcome River Valley to town 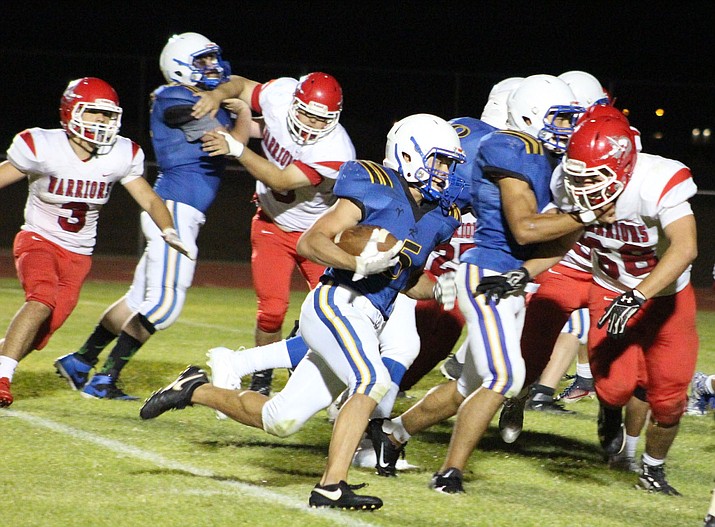 Gavin Randall and the Bulldogs are back at home Friday night when they host River Valley. Randall has rushed for 537 yards and six touchdowns this season. (Daily Miner file photo)

KINGMAN – It is no secret that the Kingman High School football team is in a state of rebuild under the direction of first-year head coach Russ Stryker. However, the key to the turnaround rests in the athletes committing to the program in the long run.

And so far, the Bulldogs have proven they aren’t backing down from the challenge.

“The kids’ mentality is better than it has been in years past,” Stryker said. “There is no decline – we have just as many kids at practice now as we did three weeks ago. The kids are going to take it in stride and they’re going to play as hard as they can Friday night. This week will be a good ‘go out, play football, give it heck and see where the chips fall.’”

“River Valley does a lot of tricky little bubble screens and then they’ll air it out,” Stryker said. “One of the nice things that happened when Lee Williams played them was they dinged up their quarterback right away. And the second guy didn’t throw quite as well. So we’ll see what happens.”

However, the Bulldogs can’t just focus on quarterback Seth Christy as the Dust Devils’ top threat is running back Zach Hammett. The sophomore has rushed for 660 yards and five touchdowns, while Christy has three scores on the ground and two through the air.

“The game plan is to try and get him contained and keep him funneled in the middle,” Stryker said of Hammett. “River Valley is playing really well. The time to have played them was at the beginning of the year because they’re getting better every week.”

Kingman, meanwhile, is looking to bounce back from a 32-20 road loss to Paradise Honors last week. The Bulldogs rushed for 290 yards and three touchdowns, but three fumbles were the difference-maker.

With all that aside, the focus is on taking strides in the right direction.

“What I tell these guys all the time is that we have to look at the big picture,” Stryker said. “For the last three years KHS hasn’t even had a JV team. This year we have a JV team who beat the other JV teams in town for the first time. So the future for KHS football looks bright, but there are going to be growing pains. That’s just the way it is. River Valley is going to be a tough game and it will probably go a long way in defining where our spot is in the pecking order of this conference.”