Prep Football: Tigers look to get back on track at home against Chino Valley 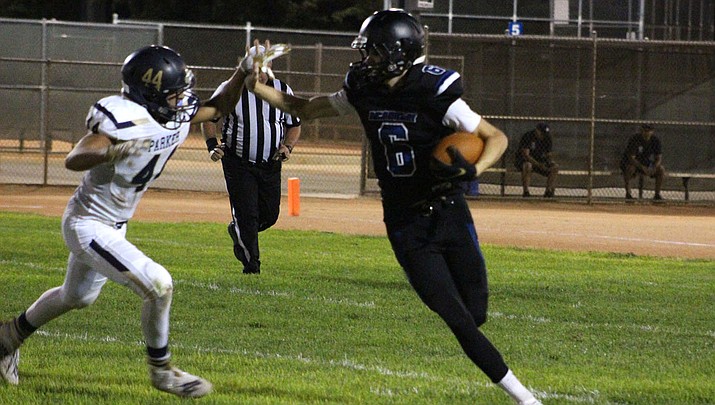 KINGMAN – A season is usually filled with ups and downs, but the true test of a squad is how it responds after getting knocked down.

The Kingman Academy High School football team has dealt with its fair share of misfortune this year, especially after suffering a 58-13 loss to Bourgade Catholic at home last week.

“We can’t give up, we have to finish,” he said. “We hold Bourgade on their first drive and then we go down and score, and we’re up 7-0. Then we kind of let it go after that. It got progressively worse in some ways. So we have to really kind of rally and finish this week. Either way, whether we start fast or start slow or they start fast or whatever, we have to keep our heads in the game and finish.”

The No. 25 ranked Cougars have lost two in a row and in lopsided fashion, falling 41-14 at home to Odyssey Institute last week and losing 42-0 two weeks ago at AZ College Prep.

But the No. 31 ranked Tigers are more focused on what they need to do to tally another win over their region rival.

“Chino Valley is a team we beat last year, but teams are different year to year,” Morgando said. “We have to put the work in. Hopefully that’s what we’re getting done this week and we’re ready to play.”

And the area of focus will be the defense.

Academy struggled to make stops against Bourgade a week ago and it led to a number of big plays.

“We have to be able to tackle a little better than we did against Bourgade,” Morgando said. “We’ve been working on tackling this week a little bit extra. It’s really about making good contact, grabbing some cloth and waiting for people to rally because we’re a little undersized in some spots. Hopefully we play a little better defense this week.”

Dallas Edwards is Anderson’s favorite target as the senior has 238 yards and three scores, followed by Hayven Potter with 163 yards and two touchdowns.

But at the end of the day, Academy’s focus isn’t on statistics.

“We need to pick up a win and get the season kind of going again,” Morgando said. “We’re at home and it should be an advantage. We’re getting into region play now and doing well is a big deal. We’re playing the teams we see year in, year out.”