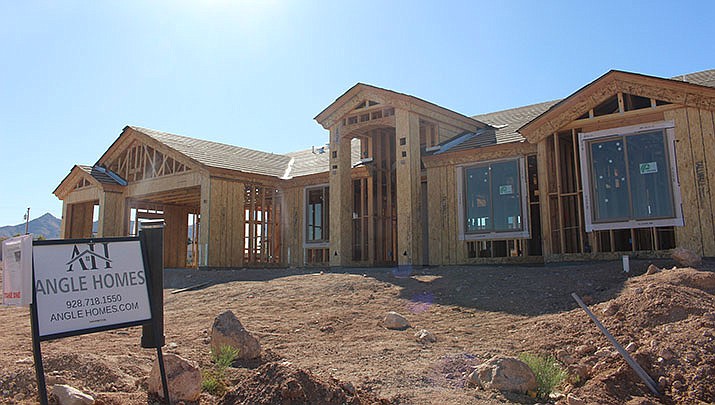 Having cited a number of safety concerns including the close proximity of some driveways to the radius of corner lots, the proposal from Angle Homes to amend front-side setback requirements received approval from City Council on Tuesday. (Photo by Travis Rains/Daily Miner)

KINGMAN – City Council was able to come to a compromise at its Tuesday meeting regarding front-side setback requirements on corner lots, a move that could provide additional building space and alleviate safety concerns stemming from the prior ordinance.

In July, a similar, City-initiated text amendment that would have seen front-side setback requirements set to 10 feet in residential districts was not approved by commissioners. The new request came from Angle Homes.

Angle Homes requested the text amendment to the City’s zoning ordinance to address an “ongoing safety concern,” City staff explained. Angle Homes wanted an amendment that would see front-side yard setbacks in the R-1-6, R-1-8 and R-1-10 zoning districts changed to a minimum of 5 feet. Currently, setback requirements for those districts are 10 feet for R-1-6 and 15 feet for the other two districts.

For R-1-20, R-1-40 and Rural Residential districts, the request is for those same setbacks to be changed to a minimum of 10 feet. Front-side setbacks only apply to corner lots.

Safety concerns cited include driveways being located too close to the radius on corner lots, boat and RV owners using handicap ramps to exit their properties and the danger of fire hydrants being struck by vehicles. Vehicles are also being backed up into the road in close proximity to intersections.

The amendment allows Angle Homes to flip a house plan to allow for additional room by placing the garage near the interior side lot line. It also lets builders place primary structures closer to front-side property lines, which provides more room for off-street RV and boat storage, alleviating safety concerns.

Council was in general agreement that the amendment would be justified for smaller districts. However, when it came to those larger districts such as R-1-40, it was not as convinced. –

Ruggles said there could still be a benefit. For example, front-side setback requirements in R-1-40 districts are 30 feet. That’s 30 feet on which structures cannot be built.

“If 10 feet is too much, maybe it should be 15 or 20 (feet). But something to give them a little more area is the feedback we’ve gotten on that,” Ruggles said, with Doug Angle of Angle Homes later adding that the revision to the proposed amendment would work for his company.

“We’re really trying to do something that benefits engineering, because they were complaining ‘Hey your driveways are too close to the corners, it doesn’t work.’ So we’re just trying to find something that works for everybody,” Angle said.

Council decided to take that course of action. It approved the amendment with a slight change, that R-1-20 and R-1-40 front-side setback requirements be changed to 15 and 20 feet, respectively. The other setbacks were amended to 10 feet as proposed by Angle Homes. The amendment comes with the caveat that RV gates and driveways will be located nearest to the interior side yard of the property.