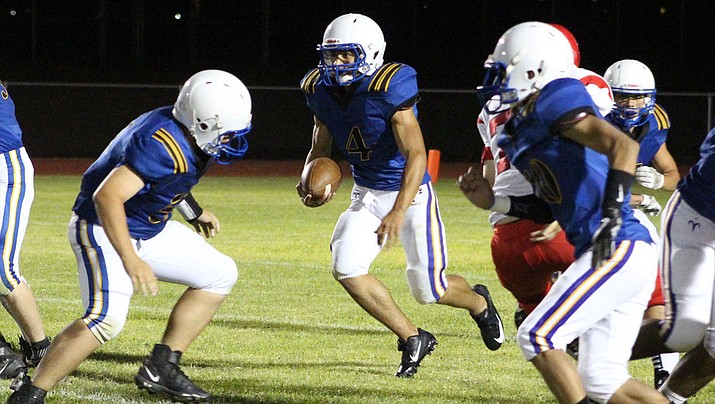 Austin Dias rushed for 96 yards and a touchdown Friday night in a 49-14 loss to River Valley. (Daily Miner file photo)

The Bulldogs fumbled it twice and finished with just 122 yards of total offense in their second straight setback.

Austin Dias led Kingman with 96 yards and a touchdown, while Harley Naylor added 23 yards and a score for the Bulldogs.

The Dust Devils opened the scoring early in the first quarter, but Dias answered back with a 48-yard scamper to bring Kingman within one point after a failed two-point conversion.

However, that was as close as the Bulldogs could get as No. 11 ranked River Valley (5-1, 1-0 3A West Region) rattled off 42 unanswered points to put the game away.

Naylor scored with 4:23 remaining in the game on a one-yard run and Ray Carter added the two-point conversion for the final tally.

At KAHS, the Lady Tigers took sole possession of second place in the region Thursday night by tallying a 3-0 sweep of No. 33 ranked Chino Valley.