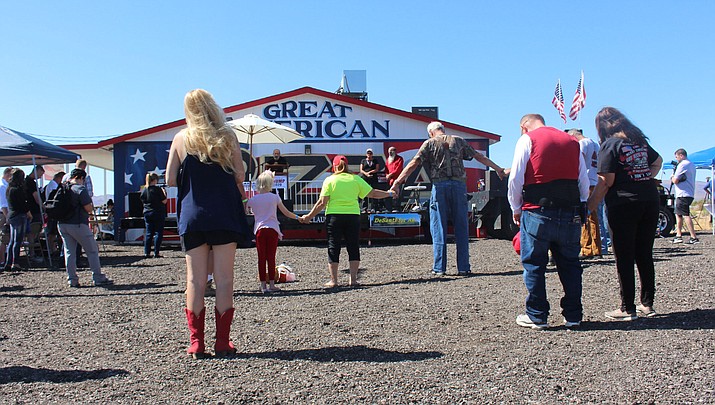 The Trumpstock festival in Golden Valley started with a prayer on Saturday, Oct. 5. (Photo by Agata Popeda/Kingman Daily Miner)

GOLDEN VALLEY – A day before Trumpstock – a President Donald Trump-centered festival that Laurie Bezick, an Illinois transplant, tried to pull off in Kingman – a road block arose.

Citing a lack of security, the City of Kingman denied a permit to hold the event at the Mohave County Fairgrounds. It was quickly relocated to Great American Pizza & Subs, a family restaurant in Golden Valley 15 miles from Kingman, at the last minute. And it was reduced from the planned three days to one.

That caused confusion and kept potential participants away when the event finally unfolded on Saturday, Oct. 5. That according to a man who wanted to be identified as David Trump, an Arizonan who “travels with the Trump campaign selling Trump stuff.”

“(People) are coming to the Fairgrounds,” he said, referring to the original location for the event. It’s the biggest venue in town, capable of accommodating thousands of guests. “And there is nothing there. No sign, nothing,” David Trump said.

The relocation played a role in reducing what was planned as a large three-day festival to a family-like gathering. The number of visitors never crossed 50 at any one time.

But an energetic Bezick, 51, didn’t look disappointed, moving from one person to another, giving orders and redistributing equipment. She had a word of warning for the press.

For Great American Pizza and Subs it was just a very busy Sunday. The owners, the Hall family, didn’t have problems feeding both the Trumpstock attendees and unassuming passers-by, who ate their pizza meatball sandwiches, often not knowing what was going on behind the restaurant.

The speakers started in the afternoon, much later than expected, and in a different order than previously announced. Rep. Paul Gosar (R-Prescott) showed up close to sunset to deliver a grave-sounding speech on how it is always darkest before the dawn.

That prompted Marco Gutierrez, founder of Latinos for Trump, to say: “I think Gosar is really worried about the impeachment.” Gutierrez spoke hours earlier about how he understands that white Americans feel threatened by the Hispanic culture taking over.

He said he would like to see Latinos politically engaged, and full assimilation into “the dominant culture” seems to him a reasonable solution.

“Liberals see me as a taco-truck driver,” he says. The most famous line people attack him for was his warning against having a taco truck on each corner, a metaphor for the spread of Hispanic culture. “At least, the Republican here listen to what I say.”

Then, with a big smile, he admits he loves tacos, and goes over his favorite taco spots in the San Francisco area where he lives.

The founder of Deplorable Pride, Brian Talbert, told the gathering he used to be a liberal. But Democrats did nothing for gay people. Not satisfied with Obama’s shifty stances on the issue of gay marriage, he is now a staunch believer in “America First” policy. 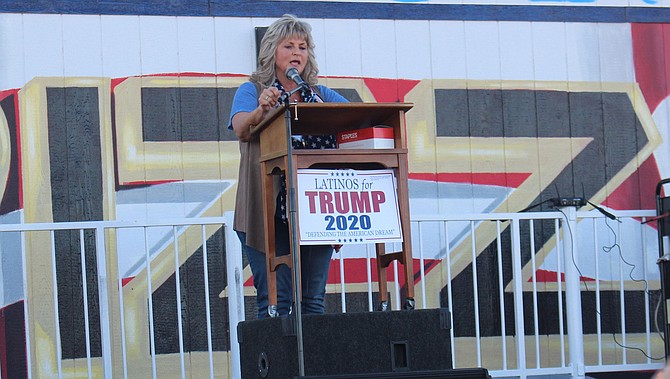 Jeanette Finicum speaks during Trumpstock on Saturday, Oct. 5 in Golden Valley. Finicum’s husband, La Voy Finicum, was shot and killed by state troopers in 2016 during the occupation of Malheur National Wildlife Refuge in Oregon. (Photo by Agata Popeda/Kingman daily Miner)

“The acceptance of LGBT in the Republican party rises,” he said. “It’s around 60% now.”

David J. Harris Jr., a black conservative from Texas, offered an interesting concoction of business and spirituality – part prayer, part performance. He managed to convince his tiny rural audience that having all three social media accounts – Twitter, Instagram and Facebook – is the best protection from sin.

Josh Bernstein, a conservative talk show host and national spokesman for Association of Mature American Citizens, was more down to earth. He sat down with The Daily Miner to talk about the roots of his belief that if the U.S. does not retain its absolute domination over other nations, we will have Chinese or Sharia law here in the U.S.

“They can either assimilate or become subservient,” he said, firmly believing that America is the only power capable of leading, and the American way of life is superior to any other. Bernstein has never left the hemisphere, his foreign trips so far limited to Canada and Jamaica.

The most esoteric of the speakers was Alexandra Levine, a Jewish-American activist who calls for American Jews to abandon the Democratic Party. Levine spoke about the presence of antisemitism in the U.S. Congress – she meant representatives Ilhan Omar (D-Minn.) and Alexandria Ocasio-Cortez (D-N.Y.).

According to Levine, there is no such thing as illegal Israeli settlements on Palestinian land. She expressed her thanks to President Trump for his support of Israel.

“At the very bottom of this, it is all a matter of faith,” summarized David “Trump,” the “Trump memorabilia” man, who stopped drinking three years ago and “gave himself back to Jesus.

“That is why we have to protect Israel no matter what,” he said. “Jews in Israel are the only guarantee of the return of Jesus Christ.” 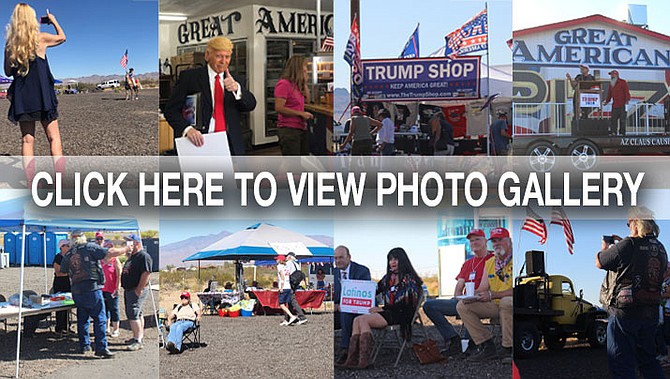