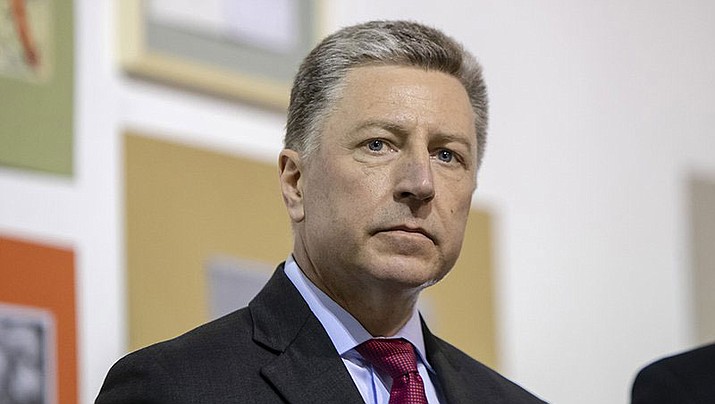 McCain Institute Executive Director Kurt Volker speaks at an event in Ukraine in February. Volker was U.S. special envoy to Ukraine until last month, when he resigned after a whistleblower raised concerns about the White House’s dealings with that country. (Courtesy photo by U.S. Embassy, Ukraine)

WASHINGTON – A day after he spent 10 hours before House committees that are pressing an impeachment inquiry of the president, Kurt Volker told staff Friday at the McCain Institute for International Leadership that he is still their executive director.

But for how much longer remains unclear, as the institute’s trustees will meet to discuss “what’s best for the institute going forward, recognizing that, at some level, this is a distraction,” a spokesman said.

Volker’s clear-the-air meeting with institute staff followed his resignation last week as U.S. special envoy for Ukraine, after his name surfaced in a whistleblower’s report about President Donald Trump’s call to the new Ukrainian president.

In that July 25 call, the whistleblower said, Trump urged the Ukrainians to “do us a favor” and investigate former Vice President Joe Biden – a possible Trump challenger in 2020.

Three House panels that are handling the impeachment inquiry – the Intelligence, Oversight and Foreign Affairs committees – released pages of text messages late Thursday from Volker in which he is an intermediary between Andrey Yermak, an aide to the Ukrainian president, and former New York Mayor Rudy Giuliani, Trump’s personal lawyer.

In those texts, Volker negotiates the terms of a meeting with Trump, with most indicating a meeting is contingent on the Ukrainians agreeing to announce an investigation.

In one text, on the morning of the call with Trump, Volker says the White House can likely “nail down a date for a visit to Washington” if Ukrainian President Volodymyr Zelensky “convinces Trump he will investigate/’get to the bottom of what happened’ in 2016.”

After Thursday’s meeting, the first of several expected over the next week, committee leaders wrote a “dear colleague” letter to other member of Congress that condemned the actions by Trump, his staff and Giuliani.

They said the Volker texts make it “immediately apparent” why Secretary of State Mike Pompeo has tried to prevent State Department employees from appearing before the committees.

The committee chairmen, all Democrats, pointed to messages from Bill Taylor, the charge d’affaires at the U.S. Embassy in Ukraine, who expressed doubts on the administration’s actions, including with delay of military aid. Taylor said the move would please Russia and shake the Ukrainians’ faith in the U.S. as an ally.

“As I said on the phone, I think it’s crazy to withhold security assistance for help with a personal campaign,” Taylor wrote in the texts Volker provided to the committees.

But Republicans in the hearings praised Volker’s testimony Thursday, while criticizing Rep. Adam Schiff, D-Calif., the Intelligence Committee chairman, and other committee leaders for limiting questions from lawmakers.

“If this is how Mr. Schiff will conduct these interviews in the future, that is a concern. Ambassador Volker has been impressive and has said nothing that coincides with what the Democrats are saying with their impeachment narrative,” said Rep. Jim Jordan, R-Ohio, ranking member on the Oversight Committee.

Volker met Friday with staff at the McCain Institute’s office, which is housed in Arizona State University’s Washington, D.C., building, to answer “any question that they had … and being as candid about his volunteer work” as the envoy to the Ukraine, said Luke Knittig, a spokesman for the institute.

National media reported Friday that Volker was on his way out, but Knittig said Volker told staff “he was continuing as our director.”

“His bosses, the people that he reports to, are discussing what’s best for the institute going forward, recognizing that, at some level, this is a distraction. But that’s where things stand,” Knittig added.

Volker declined comment as he left the meeting Friday. Calls to members of the institute’s board of trustees about Volker’s future were not immediately returned.

“What I can tell you is that we have nothing to announce. Kurt Volker is the executive director of the McCain Institute,” he wrote.