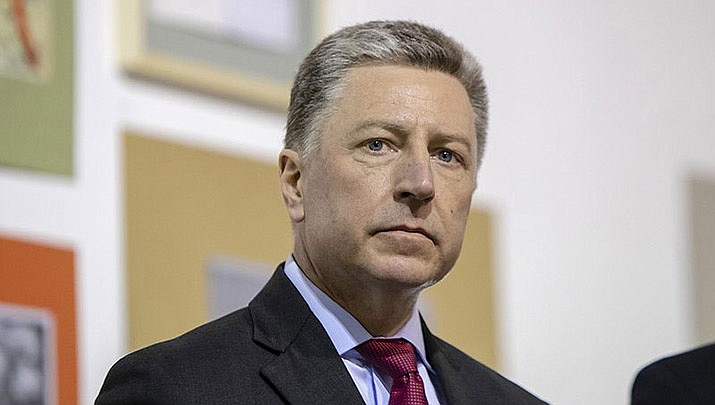 Kurt Volker, the special envoy to Ukraine who stepped down amid the impeachment inquiry into President Donald Trump, said Monday he’s also leaving his job as the head of the McCain Institute. (Courtesy photo by U.S. Embassy/Ukraine)

PHOENIX – Kurt Volker, the special envoy to Ukraine who stepped down amid the impeachment inquiry into President Donald Trump, said Monday he’s also leaving his job as the head of the McCain Institute.

Arizona State University, which hosts the McCain Institute for International Leadership at its building in Washington, said Volker will also be on paid leave from other duties at the university.

ASU spokesman Brett Hovell refused to say what those duties are or why Volker has been suspended.

The institute is named for the late Sen. John McCain and oversees programs focused on national security, human trafficking and other issues.

Volker, a longtime diplomat, was tapped by former Secretary of State Rex Tillerson to lead negotiations with Ukraine, an unpaid role.

He was little known outside foreign policy circles before he became a central figure in the House impeachment inquiry that began last month. A whistleblower alleged Trump tried to pressure Ukrainian leaders to investigate former Vice President Joe Biden, a leading Democratic candidate for president.

Volker gave a House committee text messages showing that senior U.S. diplomats encouraged Ukraine’s newly elected president to do an investigation in exchange for a high-profile visit with Trump.

Volker said in a statement that media attention on his role as Trump’s Ukraine envoy “risks becoming a distraction from the accomplishments and continued growth” of the McCain Institute.

Volker has led the organization since it was founded in 2012.

with millions of dollars left over from McCain’s failed 2008 presidential campaign.

Volker made $321,300 at ASU, according to a salary database compiled by The Arizona Republic.

McCain’s widow, Cindy McCain, said in a statement that she is thankful for Volker’s hard work and dedication to build the institute.

Volker has had previous State Department assignments throughout Europe and as the ambassador to the North Atlantic Treaty Organization. He was a legislative fellow in McCain’s office in the 1990s.