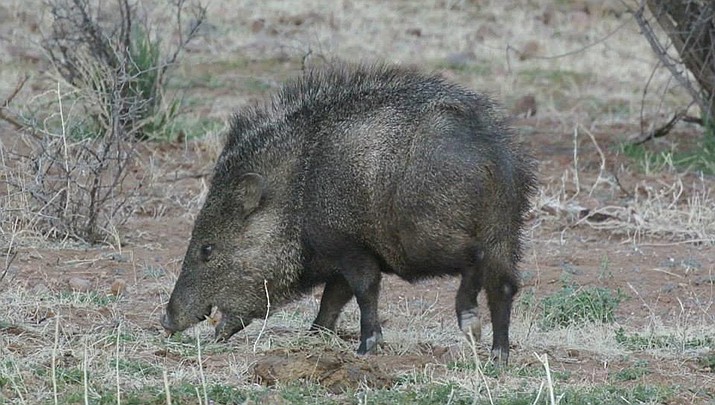 A javelina is shown feeding. (Courtesy photo by David and Peggy Ballard)

The fall hunting seasons have started in earnest, and one local young lady has made the most of the opportunity to go on her javelina hunt in Unit 10.

Ellie Bruno is no stranger to the Outdoors Page, where she has been featured after being successful in taking several javelinas and a couple of mule deer.

At 17 years old, this is the last year she can participate in juniors-only hunts.

Drawing big game tags in 2019 has been easy for the young huntress.

The junior deer and javelina tags opened on the same date, and since she had tags in the same unit for both species, a plan was made to hunt the first three days of the season.

With Ellie on her hunt was her stepfather Kenny Bellm of Kingman, friend Ray Smith and Kenny’s cousin Dominick Varallo.

Bellm decided that they would camp in the central part of the unit and hunt on the Boquillas Ranch. Permits for the young hunters on the ranch are cheap, costing $1 for elk, javelina or deer. Hunt assistants for these junior hunts are free.

Ellie has taken two mule deer before and this year she wanted to take at least a three-point buck.

During the first three days of the hunt, they saw quite a few deer, but only two small yearling bucks, which Ellie decided to pass on.

No javelina were seen until late Saturday afternoon as the group was heading back to camp, when they saw a group standing along the road.

They got out of the vehicle and when the smoke cleared, Ellie had her third javelina of her hunting career.

This weekend the junior deer season in Unit 10 will still be open along with the junior elk hunt, so Ellie is hoping to find not only a good buck to take, but the opportunity to take her first elk.