Prep Football: Bulldogs knock off Chino Valley for their first region win since 2016 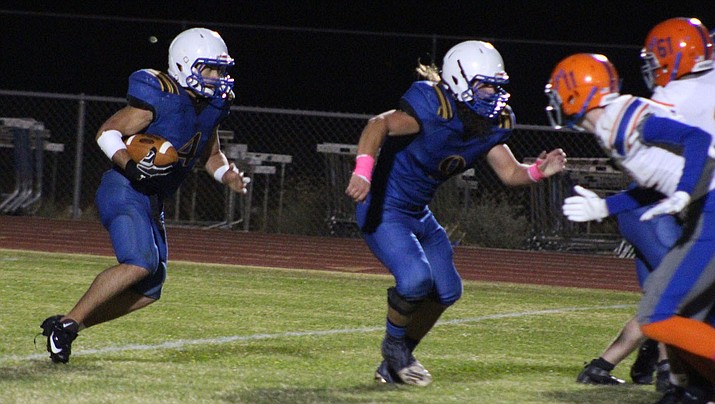 KINGMAN – When a squad is trailing at halftime, there is almost always a motivational speech to fire up the athletes for the second half.

Sometimes it works and sometimes it doesn’t, but Friday night it paid off as the Kingman High School football team stepped up its defense in a 20-16 win over Chino Valley.

“It was a good win, it really was,” said Bulldogs head coach Russ Stryker. “I would have liked to beat them by 50 just because we went in at halftime and did the kick the trash can deal and said ‘You have to get it together.’ And they responded, which is good. That is normal. That’s the way it is supposed to be where kids get coached and they respond instead of shutting down. So I was really happy to see that, I really was.”

No. 28 ranked Kingman entered halftime trailing the Cougars 16-12, but the Bulldogs turned it around in the third quarter. Austin Dias was a big part of it as the senior scampered eight yards for a touchdown with 5:01 remaining in the third.

Dias ran the ball 23 times for 122 yards and two touchdowns, while also converting a two-point conversion after his third-quarter score.

“Austin had a game,” Stryker said. “He played really hard.”

Dias also had some help as Charles Williamson broke away for a 60-yard touchdown in the second quarter to bring Kingman within 13-12. That deficit increased to 16-12 after Chino Valley kicked a field goal before halftime.

“Chino Valley game planned for us pretty well,” Stryker said. “In the first half we just had to grind a lot with a lot of weak side counter (run plays). Then we made some adjustments at halftime. We were having trouble with their blitzes and in the second half we were able to finally get some power run going – and that’s what kind of iced it.”