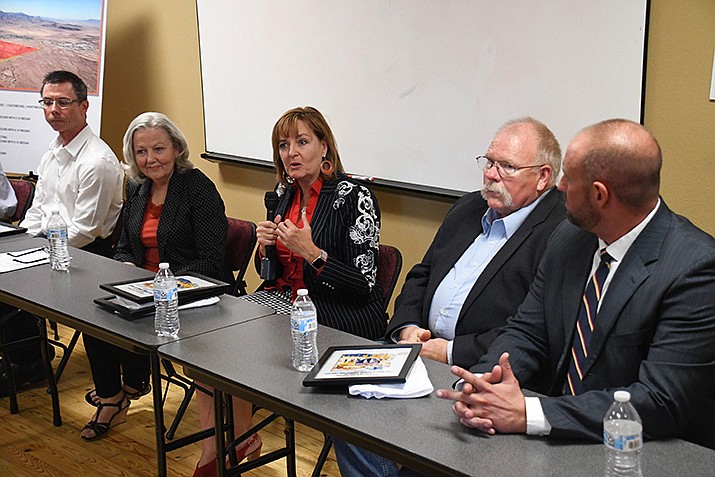 The City held a design meeting with Arizona Department of Transportation staff last week to discuss the next steps in the Rancho interchange project. According to a City press release, those steps are to secure right-of-way clearance, finalize the designs of the interchange and arterial roadways and work with landowners on a public-private partnership.

That partnership would help to address funding for connector streets and utilities. Earlier this year, Kingman was appropriated $20 million from the state for the project. However, it falls to the City of Kingman to come up with the additional $26 million needed for the interchange.

City Manager Ron Foggin explained in June that the goal is to have a private-public partnership split that cost down the middle at $13 million each. If Kingman fails to come up with a plan to raise the additional $26 million by June 30, 2024, the appropriation will revert back to the state’s general fund.

The design for Rancho could be completed by May 2020, and the project could be sent to bid by July 2020.

In a press release, the City was sure to recognize the efforts of Rep. Regina Cobb (R-Kingman) and other community partners in moving the project along. The interchange has been identified as critical transportation infrastructure for more than 40 years, the City noted.

“Thanks to the advocacy of Rep. Regina Cobb in the Legislature, and long-standing support of leaders in the City of Kingman and Mohave County as well as the Kingman and Mohave Manufacturing Association Western Arizona Council of Governments and others, state leaders are recognizing Kingman as an important area for economic development,” the City wrote.

In other interchange news, City Council signed off on the development agreement with Kingman Regional Medical Center and its partners for the Kingman Crossing traffic interchange earlier this month.

KRMC CEO Brian Turney said the last estimate for the construction cost of the interchange itself was around $20 million, which will be covered by KX Ventures, LLC, a limited liability corporation KRMC developed with the developer for the project, The Ault Companies.

Combined with the cost for arterial road Kingman Crossing Boulevard, that’s around $23 million KX will contribute. The corporation will be reimbursed through a 50/50 split of sales tax revenues from the area of the interchange for up to 25 years or until the investment is returned.