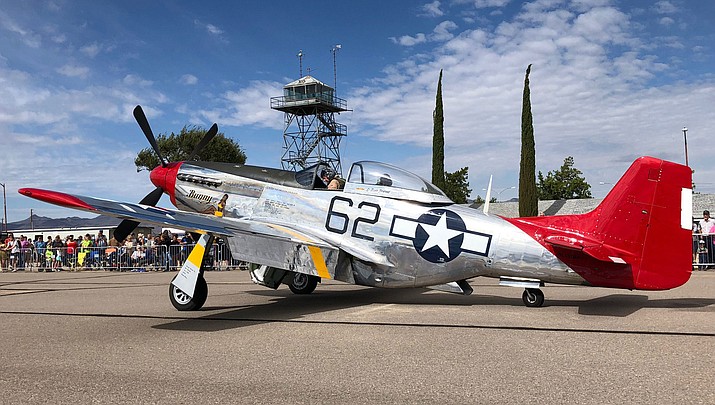 A fighter plane is shown at Kingman Municipal Airport during the 2018 AirFest. (Courtesy photo)

Kingman’s love of aviation dates back to 1942, when the Kingman Airport was built, soon becoming known to the U.S. military as the Kingman Army Airfield, one of the largest aerial gunnery training bases handling two classes of 200 students at any given time.

Located 9 miles from the city, Kingman Municipal Airport is preparing for the Second Annual AirFest, a unique open-house fly-in event that embraces the rich local aviation heritage, reminding the community that the airport is here and is for everyone.

AirFest will be held from 9 a.m. to 4 p.m. on Saturday, Oct. 19, at the airport, 7000 Flightline Drive. The event is free to the public. Prepare for airplane rides, living history tours, food and family fun. Get to meet people who work in aviation, how interesting flying machines are and how they were built.

“We want to show kids ways to get involved in aviation,” said Tim Gerlach, the main force behind the AirFest and president of the Experimental Aircraft Association Chapter 765 based out of the local airfield. “To give them a chance to become pilots and mechanics.”

Gerlach represents the spirit that is not uncommon to the area – home to many pilots and veterans who passed through Kingman at some point in their career and found it a good place to retire. Some of them spend their time carefully reconstructing replicas of WWI aircrafts, and that was the group Gerlach got involved with when he moved to Kingman in 2004. By that time, after years of thinking about planes, drawing and building models, he already had a pilot’s license.

“Glad you asked,” Gerlach says, his voice now filled with delight. “First of all, anyone can make them. They are just less complex than WWII aircraft. 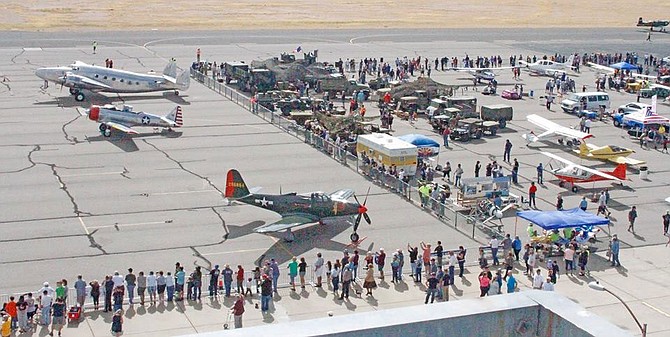 A crowd gathers at the Kingman Airport to view a variety of aircraft during the inaugural AirFest held last year. The 2019 version is slated for Saturday, Oct. 19 at the airport. (Courtesy photo)

But what is more important, WWI represents the first wave of aviation.

Those pilots were like gods, pioneers, knights of the sky. It was a cutting-edge technology then, many people never seen anything like that. Men in planes – flying warriors. We want to carry the heritage of those people.”

Last October was the first time in more than a decade since Kingman airport hosted any larger community events.

In May 2018, the airport management changed and the new team quickly put together AirFest 2018, effectively working with the City.

That is why it is not a full air show. The air traffic will be normal; one can land, buy fuel and go to the Airport Café.

The airport serves up to 1,000 passengers each year.

It is also a place where the Young Eagles take advantage of free airplane rides offered to anyone under 17.

“We want to establish Kingman as a regional capital of aviation,” Gerlach says.