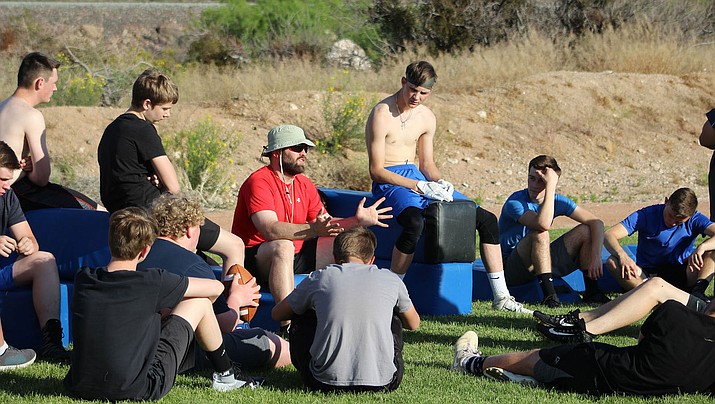 The Tigers have canceled the remainder of the 2019 football season after a lack of numbers. Academy does plan to continue the program with the hope of increased numbers moving forward. (Daily Miner file photo)

KINGMAN – No athlete wants to see his or her season end early, especially when they are a senior.

That final year is one of the most memorable and sets the stage for the next stage of life.

But the real world is full of unfortunate events and the Kingman Academy High School football team learned that first hand as the Tigers won’t finish the 2019 season.

“It sucks that the season got canceled, but there’s not much we can do about it,” said Academy senior Dallas Edwards. “There were only 12 of us left at practice throughout the last week we were playing. We got down to three seniors and a few juniors. We just couldn’t do it. It sucks for us seniors, but I just hope the program can start back up and get some more players.”

The Tigers do plan to keep their program running, but this season was a struggle as the team of around 30 slowly dwindled, forcing two games to be canceled.

Nevertheless, the choice to call the rest of the season wasn’t an easy one. Academy head coach John Morgando made sure to get input from the athletes and see what they wanted.

“I told them I backed them either way – if they wanted to try to do it, we could try to do it,” Morgando said. “I just voiced serious safety concerns on a personal level. I felt it was going to be very difficult and too unsafe for them to try to attempt it.”

And those safety concerns won out despite the fact that some Tigers such as senior Brendan Beckett wanted to continue throwing on their shoulder pads and helmets.

“It was definitely a hard decision,” Beckett said. “I personally didn’t vote for not playing, but I had already hurt my ankle and if I hurt it again, we had no one to fill my position. Coach also said something about us putting freshmen and sophomores who had never played in those positions against these big football players that they would get absolutely crushed playing against.”

However, one silver lining for Academy is the fact it has other athletes waiting in the wings. The Tigers are only losing three seniors and have a number of underclassmen expected to return in 2020.

“The junior class that will be a senior class next year is big – it’s over 10 kids,” Morgando said. “The sophomore class is right around 10 kids with everyone healthy and eligible. There’s a lot to build on if we keep the buy-in and the commitment.”

And Morgando plans to extend that to the eighth-graders at Kingman Academy Middle School.

“We want them to all come here,” he said. “We don’t want them to be afraid the program is going to be canceled, because that’s not the case. The intention is that it’s going to be here. We’re going to have a JV, all provided we get the numbers we need to get out, which has to be more than we had last year. We can’t have in the 20s.”

The signs are pointing in the right direction though as a group of athletes were in the weight room Tuesday afternoon and plan to keep at it despite no more games this season.

“We’re going to do some team-building stuff going forward,” Morgando said. “They’re coming to my house to watch some college football this weekend. They’re going to do a lot of conditioning on Thursdays and work together in the offseason. I really want it to be a lot of player-led stuff. I want them to step into those leadership positions going forward.”

Meanwhile, there will be more work behind the scenes as Morgando and Academy Athletic Director Michael Perrine have planned a meeting with parents next week to talk about the 2020 season.

The focus will be on increased participation, building the program back up and getting everyone re-energized and motivated.

“We’re going to have to go from there and see what our numbers are looking like,” Perrine said.

And for those wondering about Senior Night, there will be a ceremony Tuesday, Oct. 29 when the Academy volleyball team hosts River Valley.

However, at the end of the day it won’t be the same for the few dedicated Tigers who continued stepping on the field.

“It was heartbreaking – the kids put in so much time,” Morgando said. “To have their senior year go down like that, especially for those guys is brutal. But I told them, ‘It’s not your fault. You guys were the ones who stayed eligible and were here consistently. That’s a credit to you for sticking with it when things started looking bad when we lost people to different things.’ Those guys really wanted to compete, they really wanted to play.”