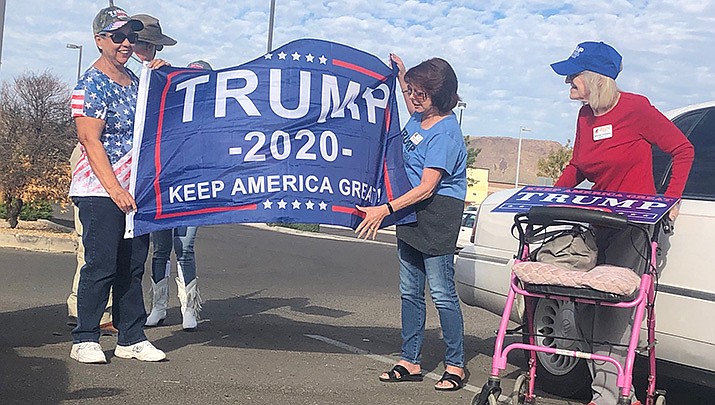 “Don’t impeach Trump!”, “Best president ever!”, “He’s not a socialist!” – were among the most popular exclamations. (Photo by Steven Robinson/ Mohave County Republican Party)

KINGMAN – Local Trump supporters were surprised to find out last minute that there was a last-minute anti-impeachment march for President Donald Trump planned in Kingman Thursday morning of October 17.

Nonetheless, the community organized around Mohave County Republican Party District 1 and Conservative Republican Club of Kingman immediately mobilized and showed up promptly at 9 a.m. in front of the Walgreen’s on Stockton Hill Road.

The two Nevada ladies who organized the rally, LuLu Francis and Lori Lee, got stuck in traffic, and showed up around 9:20 a.m., along with some Trump supporters from California. They came with the signs: “Our United States is a Christian Nation” and “Make Liberals Cry Again.”

Virna Merlina Schiff, the wife of Dr. Lawrence Schiff, president of the Conservative Republican Club of Kingman carried a rifle. As a native of Columbia, she represents Latinas for Trump.

The activists – a group of about 20 people – stood along Stockton Hill Road, waving at passing-by cars. Some drivers honked in a response, proving Kingman has many Trump supporters.

“Don’t impeach Trump!”, “Best president ever!”, “He’s not a socialist!” – were among the most popular exclamations.