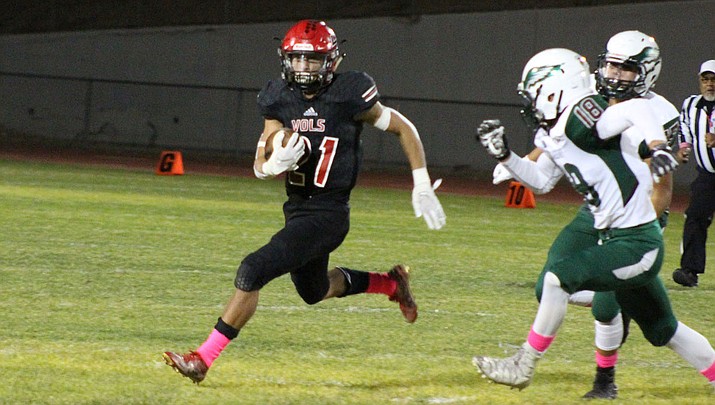 KINGMAN – Any squad, no matter the sport, enjoys the opportunity to go on the road and beat an undefeated team.

The No. 26 ranked Lee Williams High School football team will get the chance to do just that at 7 p.m. Friday against No. 11 ranked Coconino.

“It’s a good challenge for us,” said Vols head coach Patrick O’Boyle. “We understand what’s at stake here – they’re undefeated and if they win, they win the region. We’re very excited to defend and challenge ourselves this week.”

O’Boyle is right, the Panthers can lock up the 4A Grand Canyon Region crown with a victory Friday night and they’re on a roll after cruising to a 62-13 win last week at Mohave.

That is far from Lee Williams’ focus though.

“We’re not going to overhype anything,” O’Boyle said. “We’re not going to make anything bigger than what it needs to be. We understand we have to be a lot better than we have been up front, especially with what they like to do. We’re going to have to be very disruptive up front on both sides of the line of scrimmage and establish the line of scrimmage on both sides of the ball.”

The battle in the trenches will especially be important as Coconino’s Zach Bennett has rushed for 1,225 yards and 19 touchdowns.

However, he’s not the only one the Vols have to watch out for as Bailey McCauslin has 473 yards and seven scores for the Panthers (7-0, 4-0 4A Grand Canyon Region).

“Coconino is very well-coached, very physical and they run a scheme that’s tailored to their kids,” O’Boyle said. “Kudos to them because not a lot of guys are willing to do that. It’s not a very flashy offense, but in the same regard they do things right. We know they’re going to run the football. We’re going to continue to stack the box against them, but it’s about being disciplined and assignment sound. If we’re willing to do our job, we’ll set ourselves in a positon where we can be successful.”

The Vols (3-3, 1-2) are also in an interesting situation as they have yet to lose consecutive games this season. That has been part of the focus and Lee Williams isn’t backing down from the challenge.

“It’s been a good evaluation week for us,” O’Boyle said. “The kids’ spirits are still the same. We’re hungry and we want to get back on the winning track. We’ve done some things the right way in that regard this year as far as bouncing back after a loss. But again, our kids are staying hungry and we’re very excited about the challenge at hand.”