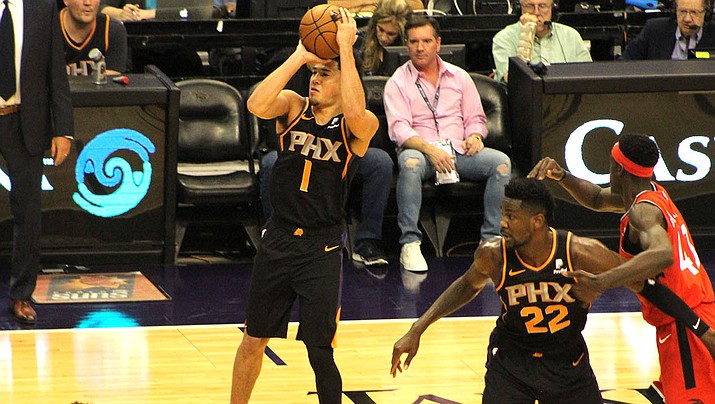 Devin Booker, left, and DeAndre Ayton were key players for the Suns a year ago, but it didn’t translate into wins as Phoenix finished with a 19-63 record. (Daily Miner file photo)

PHOENIX (AP) – Devin Booker says a busy offseason for the Phoenix Suns is proof the franchise is serious about ending a playoff drought that’s approaching a decade.

Booker and last year’s No. 1 overall pick, Deandre Ayton, comprise the team’s promising young core and the Suns hope they can grow into a pair of perennial All-Stars. They were very good last year – Booker averaged 26.6 points per game and Ayton averaged a double-double – but it was obvious they needed help after the Suns finished with a 19-63 record.

“Even our young players are guys that know the game, high-IQ players, well-coached guys who are ready to work,” Booker said. “The additions we made with Ricky, Dario and Aron Baynes – re-signing Kelly – I think we have NBA guys that know who they are in the NBA and know how to take it to the next level. That’s making a playoff push.”

The new players will help, but it’s the Booker-Ayton combo that everyone is watching.

A fifth-year guard, Booker still doesn’t turn 23 for a couple weeks. His relative youth – combined with ample NBA seasoning – have the Suns excited that he can turn into one of the NBA’s elite scorers.

The 7-foot-1 Ayton is another intriguing young player. He recently turned 21 and averaged 16.3 points and 10.3 rebounds last season despite being very raw in portions of his game.

The 6-foot-7 Oubre was a pleasant surprise after being dealt from Washington to Phoenix in the middle of last season. He averaged about 17 points and five rebounds after the trade and provided consistent defense on the perimeter.

Like a lot of the Suns, youth is on his side. He won’t turn 24 until December.

The Suns also made a change on the bench, bringing in Monty Williams. He was the head coach in New Orleans for five seasons from 2010 to ‘15, finishing with a 173-221 record, including two trips to the playoffs. He was an assistant with the 76ers last season.

“I can’t say enough about how excited I am about the challenge,” Williams said. “Not just this season but going forward.”

The Suns should get a good gauge on their early progress before Halloween.

Phoenix opens at home against the Sacramento Kings Wednesday before a brutal three-game, four-day stretch that includes a road game against the Denver Nuggets before home games against the Los Angeles Clippers and Utah Jazz.

All three teams are expected to be among the Western Conference elite this year.

Arguably the most important offseason addition was Rubio, a 6-foot-4 point guard who is in his ninth NBA season. He was with the Utah Jazz the past two years and they made the playoffs both seasons.

The Spaniard gives the Suns the true pass-first point guard they lacked for most of last season. He’s averaged nearly eight assists per game over his career.

Compared to many NBA rookies, Johnson and Jerome are old guys. Both should provide depth on the perimeter. The 6-foot-9 Johnson was the No. 11 pick by the Minnesota Timberwolves before coming to the Suns in a trade. He averaged 17 points per game and shot 46% from 3-point range for North Carolina as a fifth-year senior.

The 6-foot-5 Jerome won an NCAA championship with the Virginia Cavaliers last season. He averaged 13.6 points, 5.5 assists and shot 40% on 3-pointers in his junior season.

The 6-foot-10 Saric is still just 25 years old and has shown promise with the 76ers and Timberwolves. The Suns hope he can find a home in the desert, providing an inside-outside threat next to Ayton.

The wide-bodied 6-foot-10 Baynes should provide useful minutes for the Suns in the paint. He has lots of experience on winning teams, including winning an NBA title as a backup with the San Antonio Spurs in 2014.

The 7-foot Kaminsky can stretch the floor. He shot about 35% from 3-point range during his four seasons with Charlotte before coming the Suns in the offseason.