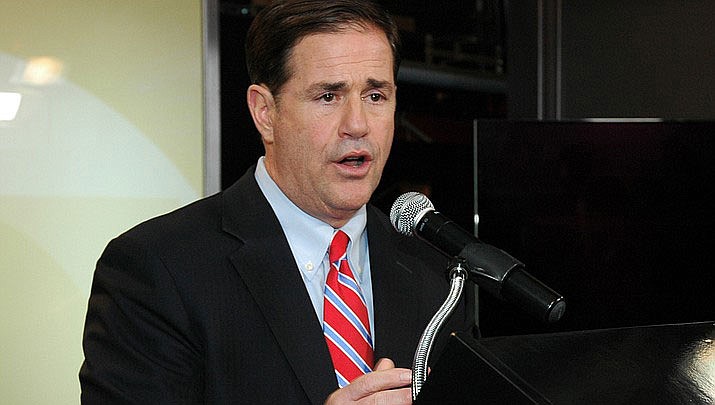 But the governor does not favor turning some of these offices into appointed positions.

Ducey repeated his call on Maricopa County Assessor Paul Petersen to resign following his arrest stemming from his operation of an international adoption business.

He faces charges in Arizona of defrauding the state by having pregnant women who were willing to give up their babies flown from the Marshall Islands to Arizona and then enrolling them in the state's Medicaid program. There are similar charges pending in Arkansas and Utah as well as federal charges of human smuggling.

Petersen remains in federal custody, meaning he has not been to his county office since the indictments were announced earlier this month.

There is a state law which allows county supervisors to suspend the assessor – and the treasurer – for "defalcation or neglect of duty.” The former refers to misappropriation of funds which is not an issue; the latter could be a factor if Petersen does not show up at work.

Even that law, however, has limits, the most notable being that any suspension can last only 120 days unless there is a move to remove that person based on a criminal conviction.

"I have called on Paul Petersen to resign,” Ducey said Tuesday. "The people's business, of course, needs to be done.”

There are remedies in law when the person at the center of a probe is a state official. That includes the ability of the Legislature to impeach the governor or any other statewide elected official as well as all Supreme Court, Court of Appeals and superior court judges.

And lawmakers themselves are subject to expulsion by their colleagues. There is, however, no similar remedy for county elected officials.

"What happened to Paul Petersen is a real anomaly in terms of municipal government,” Ducey said. "There likely should be a remedy in the law to fix a situation like this.”

The governor had no specific idea of how best to do that.

"I think there's a couple of different ways to solve it,” he said.

"It's probably best done with some coordination between state, municipal and city people talking about what a remedy would be in this type of once-in-a-generation type situation,” Ducey continued. "But it is a situation we have to address.”

The governor did not specify what kind of actions he believed should trigger removal. And press aide Patrick Ptak refused to answer any questions to clarify Ducey's views.

None of this would be necessary if county "row officers” like the attorney, sheriff, assessor and others were selected the same as they are in cities: by the elected members of the city council. That empowers council members to remove those officers for neglect or abandonment of their jobs.

"I have an opinion on all of this and how we could restructure and make it more effective or more efficient,” he said. But he wouldn't provide any hints to his thoughts.

"That's not my role as governor,” Ducey said. "It's to be the chief executive of the state government.”

Still, Ducey made it clear he was not willing to lead any sort of charge to change the selection process.

"I'm not looking to take the vote away from the people,” he said.

"That's how the framers of the Arizona Constitution set it up in 1912,” the governor explained. "And it's my job to then execute the laws in that framework.

And Ducey said anyone who wants to alter that is "more than welcome to go to the ballot.”

There already is one legal option: recall.

That's what happened in 1994 when Pima County voters ousted Alan Lang in the middle of his four-year term amid various allegations, including complaints of sexual harassment and a sharp increase in home valuations.

In the case of Petersen, however, recall appears not to be a realistic option. Given the time it would take to gather and verify the signatures, a recall election likely could not take place before the already scheduled August primary where the Republican assessor could be beaten by a challenger.