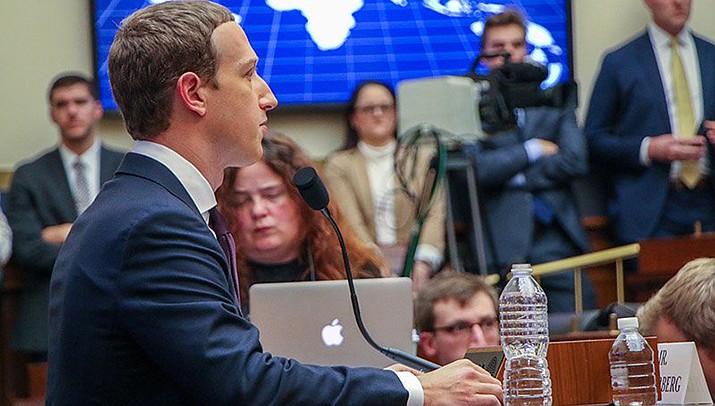 WASHINGTON – Arizona joined 46 other states and territories this week in antitrust investigation of Facebook, including whether the social media giant violated consumer data privacy and whether it is a monopoly that has driven up advertising prices and suppressed competition.

Arizona Attorney General Mark Brnovich said Tuesday that he joined the investigation being spearheaded by the New York Attorney General’s Office to ensure that “digital platforms respect consumer privacy and do not engage in anticompetitive behavior.”

“Enforcement of state consumer protection and antitrust laws in the modern marketplace demands new strategies and focused efforts from state and federal authorities,” Brnovich said in a statement Tuesday, the day the multistate probe was announced.

That news came one day before Facebook CEO Mark Zuckerberg’s grilling Wednesday in front of a House committee. Zuckerberg acknowledged federal investigations and concerns about his company, but also warned members of the House Financial Services Committee that stifling innovation with Facebook would lead other countries to overtake the U.S. in technology.

“This has been a challenging few years for Facebook. I recognize we play an important role in our society, and we have unique responsibilities,” Zuckerberg said in his prepared testimony. “For as long as we’re here, I’m committed to using our position to push for big ideas that we believe can empower power people.”

“Even the largest social media platform in the world must follow the law and respect consumers,” James said in Tuesday’s announcement. “I am proud to be leading a bipartisan coalition of attorneys general in investigating whether Facebook has stifled competition and put users at risk.”

Arizona has been in discussions with James’ office for some time before deciding to join the probe on Oct. 3, said Ryan Anderson, a spokesperson for Brnovich. It was not until Tuesday that the additional states’ involvement was announced publicly. Barak Y. Orbach, a University of Arizona law professor, said the widespread support by state officials reflects consumers recent concern about data algorithms, tracking, and spying, as well as a shift in public opinion of big companies since the recession. He believes it could soon lead to shifts in antitrust law.

“The law is about to change,” Orbach said. “The federal government has not been aggressive enough about protecting the public, and now the states are more aggressive.”

A contrite Mark Zuckerberg acknowledged problems at Facebook that he said the company is trying to fix, but he also warned lawmakers against overregulation that could stifle innovation at the company. Orbach said investigation by the attorneys general may affect the law. Corporations will suffer a “significant disciplinary effect” and pay more attention to consumer concerns, he said, or they will face legal action and more stringent regulations.The states are not the only ones investigating Facebook.

Zuckerberg on Wednesday fielded House members’ questions about probes by the Federal Trade Commission over data breaches, as well as with a Justice Department review of big-tech companies including Facebook, Apple, Google and Amazon.

Lawmakers also grilled Zuckerberg over what role Facebook may have had in Russian meddling in the 2016 election, charges it censors conservative speech on its platform and how Facebook ads may enable housing discrimination.

When Zuckerberg acknowledged the issues and said Facebook is working to solve them, Rep. Gregory Meeks, D-N.Y., responded, “But words are different from actions.”

Despite a generally apologetic tone to his testimony,

Zuckerberg used much of his time to talk about Libra, the company’s emerging cryptocurrency that he said could help bring financial freedom to low-income communities globally that cannot access normal banking services.

Although he said Libra would not move forward without all the proper regulatory approvals, he also took the opportunity to warn lawmakers about overregulation. Zuckerberg said the cost of not innovating could include China overtaking the U.S. as a technology leader.

That was echoed after the hearing by Walter Olson, a senior fellow at the Cato Institute, who said the U.S. is currently “the envy of the rest of the world.”

Olson said “it would be a blow to creative liberties” if antitrust laws “paralyzed” tech firms like Facebook – many of which are American companies that are beneficial to the country in terms of “brainpower” and jobs.

The states are pressing ahead, but they have not proposed a timeframe for their investigation.

Attorneys general that joined the New York probe in September were from Colorado, Florida, Iowa, Nebraska, North Carolina, Ohio, Tennessee and the District of Columbia. James’ office said this week that six states have since joined that do not want to be identified.