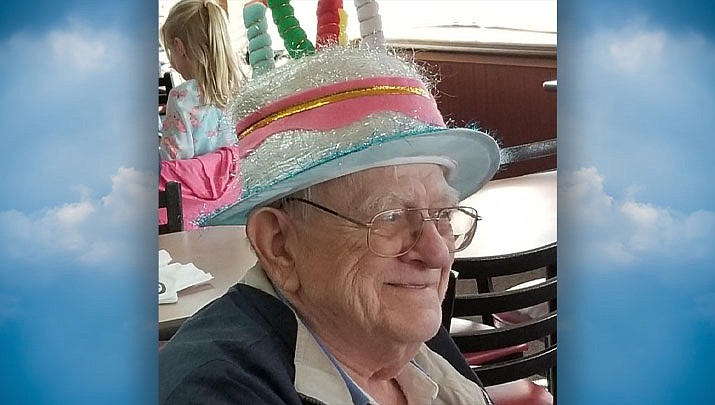 John Charles Holubik Sr., age 91 passed away peacefully Oct. 19, 2019. He was born Jan. 15, 1928 in Freeland, Michigan to Martin and Genevieve Holubik. On Feb. 5, 1949 he married Leona M. LaBeau. She was the love of his life and they celebrated 70 years of a strong, loving and faith filled marriage. John was predeceased by Leona who he cherished and missed dearly May 9, 2019. John is survived by four children; Barbara Holubik of Kingman, Arizona, John (Pat) Holubik of Saginaw, Michigan, Brenda (David) Katz Wentzville of Missouri and Theresa Cullinane of Golden Valley, Arizona. John and Leona were blessed with 12 grandchildren, Matthew, who predeceased them on Oct. 13, 2016. Surviving are Johnny, Andy, James, Adam, Darby, Shire, Justine, Wade, Marie, Rachel and Tina. He is also survived by 18 great-grandchildren and six great-great-grandchildren. John was predeceased by six brothers; Joe, Martin, Tony, Jerry, Frank and Victor and sister; Lillian. He is also survived by two sisters in-laws; Louise (Jerry) Holubik and June Daly. He also leaves many nieces and nephews who he loved dearly.

The life John lived set an example for his family to follow. He had a strong work ethic and integrity. His family always knew him to be a patient, caring and generous man. With Leona by his side he started his own business; he was owner and operator of Hydraulic Installation Company in Freeland, Michigan. After retiring in 1995 he turned the business over to his son who continues to operate it. John and Leona traveled all over the U.S. and found Kingman, Arizona, where they settled and made their home after his retirement. John enjoyed volunteering his time and talents to many organizations. He had been a member of the Elks, a member of the Knights of Columbus where he was a 4th degree knight. His special interests were Our Lady of the Desert Catholic Church where he attended mass. There he saw they needed a new alter and inset for the Tabernacle so he put his woodworking skills to use and built both. With his friend Robert Loose he put his talents to use helping renovate the Kingman Army Airfield Museum. Bob and John developed a friendship that made them as close as brother’s. The example set by Papa and Nana taught their grandchildren the meaning of true love and generosity. John and Leona will be dearly missed, but are now together once again and holding hands. The family wishes to thank Dad’s caregivers, especially Lorena and Linda and the staff from Harmony Hospice. Their care and compassion was greatly appreciated. A memorial mass for John will be celebrated Monday, Oct. 28, 2019 at 10:00am at Our Lady of the Desert, Dolan Springs, AZ 86409.