Suns start slow, then blow past Kings in season opener 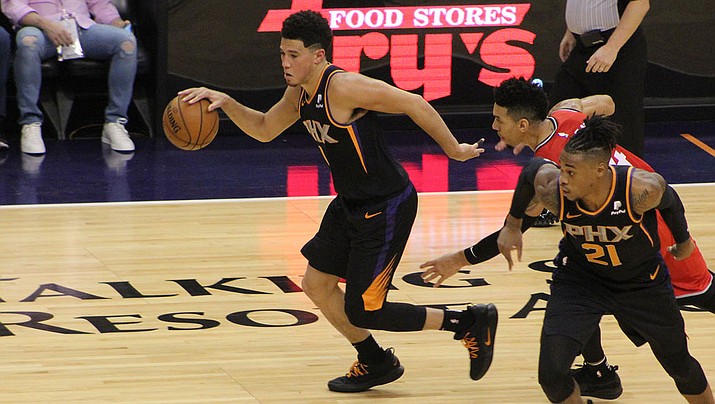 Devin Booker had 22 points and 10 assists Wednesday night to lead the Suns to a 124-95 win over the Sacramento Kings in the season opener for both teams. (Daily Miner file photo)

Two unexpected 3-pointers later, the Phoenix Suns had the spark they needed to blow past the Sacramento Kings for a 124-95 win in the season opener for both teams on Wednesday night.

"Jevon just doesn't listen to me, that's pretty much it," Williams said with a grin. "He just goes nuts, hits shots and defensively he gets all over people. He has selective hearing. I was trying to scream to him to slow down, but he's a pitbull. That's what I love about him."

While the reserves stepped up, the starters played well, too.

It was an encouraging night for a franchise that hasn't been to the playoffs since 2010 and finished with a dismal 19-63 record last season.

"We have a lot of potential, but it's just one game," Rubio said. "We have to show it every night. Tomorrow we come back, go to practice and get better."

Deandre Ayton, the No. 1 pick one year ago, added 18 points and 11 rebounds while shooting 9 of 14 from the field.

Sacramento was led by Buddy Hield, who scored 22 of his 28 points in the first half. Hield shot 10 of 19 from the field, including 6 of 12 from 3-point range. Marvin Bagley III added 14 points and 10 rebounds.

The Kings shot just 28 percent from the field and had 18 turnovers in the second half.

"They had the momentum, they made shots, they made plays, they played harder than us," Hield said. "They deserved to win."

Williams won in his Suns coaching debut. The 48-year-old Williams coached the New Orleans Hornets for five seasons from 2010-15 and got another opportunity with Phoenix during the offseason.

The Suns trailed by five at halftime but rallied for an 86-76 advantage headed into the fourth. Carter hit back-to-back 3-pointers late in the third to give the Suns some unexpected offense, highlighting an impressive run by the Suns' second unit.

The Suns are back in action Friday night with a trip to Denver.

Williams also won as a head coach for the first time without his wife Ingrid, who died in a car accident in 2016 at 44 years old.

"First time I've done this without Ingrid and that was just different," Williams said. "A lot of emotions, a lot of good stuff. So thankful my kids were there tonight for the whole game and got to see that. So glad I got to do that with this group."

Suns: Rookie guards Ty Jerome (right ankle sprain) and Cameron Johnson (left calf soreness) were inactive. ... Booker was called for a technical foul in the third quarter after arguing with a referee. ... The Suns improved to 36-17 all-time in home openers.